I have a handful of days until I turn 40, and still don't have a clear answer to the question, "what do you want to be when you grow up?" I graduated high school with no answer. And despite a last minute panic visit to the career center in the Spring of my senior year of college (where they all but laughed at me), I graduated college with no answer.

That said, I've had a variety of different jobs that I've enjoyed, and occasionally loved, mostly all within the same broad field. I worked for a cause, and my true believer fervor sustained me even when the work and people didn't. The pay was, of course, largely in good feelings. Still, I don't regret any of it for a second. But nor do I miss that world or work.

My last job was creating and running a business that I had obsessed and pushed into existence, which was in and of itself a huge leap into an unknown void of ambition and hope. It didn't turn out to be viable in the format that would have made it worth continuing for me, so I made the difficult decision to shut it down this past Spring. Again, no regrets.

Since then I've been trying to simultaneously sell off my remaining business inventory and make a career out of writing books. I should also add, I'm a (snobby, snooty) choral singer and have been looking for a new, professional-level choir to join. What this amounts to is that I spend most of my days toggling between intense writing for a new novel, riding the highs and lows of querying an existing manuscript, auditioning for choirs in odd small church rooms and trying to sell stuff on Craigslist. Which really means that I spend a lot of time finding myself in uncomfortable situations with a very high likelihood of rejection.

On the whole I'm OK with the constant rejection. The occasional good news and the intense personal satisfaction of spending my days lost in obsessing over the smallest details of a character and story more than makes up for the no's. (Has any profession ever been better suited to obsessive personalities than writing? or maybe the least well suited?) But occasionally a rejection can stab me in a place on my body that I can't even reach.

For example, I am currently selling a large metal table on Craigslist, about 6'x3'. It's a perfectly nice, used, heavy duty metal table, great for a work bench in your garage or shop, or for starting your butchering business etc. Nothing special, nothing lurid. And the price is more than fair. But I'll be honest, very few people have expressed interest in this table! Which is a pain because this thing takes up an enormous amount of room in my storage unit. So I was really excited a few weeks ago when someone contacted me on Craigslist about the table. I thought for sure it would finally sell.

Now as you probably know, Craigslist can bring out all kinds of odd drama; don't ask me about the amount of aggressive haggling that went into trying to sell a little red used Dust Buster. Or the surprise hurt of being rejected by a couple of snake handlers who found my metal rolling shelves to be too narrow for their snake tanks after all. So I was delighted--literally, smiling ear to ear--when I met my potential table customer and discovered that she was there to audition my table for a play! Not just a small, nothing play. But a real, main stage, professional theater play. I mean, how exciting for my table!

And friends, rest assured that my table really got put through the paces. The theater props manager and the director BOTH came to examine my table, feel my table, knock rhythms on my table, lift my table and lie on my table. Yes, lie--it's a crucial part of the script, apparently. I was fascinated. But after 45 minutes, alas, they still just weren't sure. So they took a video of my table to send to the Props Director and told me that they'd let me know if my table got a call back.

Now any wise creative person would at this point realize that her table was going nowhere, but not me. I left feeling so hopeful that my lonely, unloved table was not only going to fly the nest, but really make a name for itself. I was already picturing myself taking my husband on a date to see the play, purely to feel pride that _my table_ was up on that stage that night. It just needed to dazzle in the call back, and surely it would.

But it was not to be. I got a very nice email from the props manager a week later explaining that the director had decided to go in a different direction. My table didn't get the call back. And wow, was I unexpectedly sad. I mean, forget the constant query rejections or the unexpected "no, thank you's" for choirs that I didn't even like all that much but was sure would want me. My table hadn't even gotten a call back.

It laid me flat.

So I began to question what I was doing in general, wondering if I have any business in being in the creative world. I mean, I'm really really good at multi-tasking and running teams and all that stuff you don't normally associate with creative thinkers. Probably very few of the people I've worked with in the past would say, "oh yeah, her. She's really creative." (We can talk about the gender dynamics of that some other day.) But I am. I am full of absolutely terrible ideas. Just stuffed full of them. And a few of them, just a few, are terribly good.

But I can't sell this table, and I keep hearing no.

This is normally where I tell you that things are going to work out in the end, and fortitude, and grit and all that. But that's not where my head is. Instead, I'm pretty sure that I'm going to have to list this table on the free Craigslist section in the near future--and then discover that I can't even give away this table for free. Because isn't that what every creative fears? That your stuff is so bad, so unremarkable that you can't even give it away for free?

Honestly, I don't think that's the case for my manuscripts (or my singing). I believe 1,000% that they're damn good, can't-put-'em-down reading stuff, and that in some universe I am a wildly successful published soprano.

But still, the table. 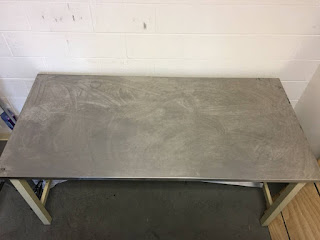