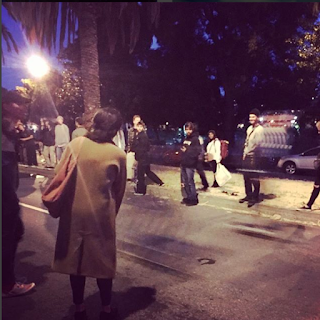 My mother can't yell. She has logged more hours protesting and resisting than I have cooking dinner for my kids. But for as long as I have known her, she has been physically unable to raise her voice. She also can't really sing, though god bless her for trying and enjoying it anyway. Her own mother was the same way.

Like them, I've gone through periods in my life where I had physical trouble with shouting. So as I've been taking voice lessons and absorbing the political news over the last year-ish, I've thought about why this happens and what it means, if anything. Because if you're doing them right, voice lessons should teach you how to sing and also how to talk (and yell). And writing follows.

The thing I keep coming back to is that I've spent my life trying to figure out how I should sound. Should I speak at a lower pitch so I will be taken more seriously, as my well-meaning mother insisted when I was younger? Belt with full vibrato to the back of the hall like a pissed-off Rhinemaiden in the deadly dull seventh hour of The Ring? Skim high on my voice like a bubbly fun girl who likes beer (I don't)? Sing with straight tone like a little kid who sneaks books about horses? Etc. I've tried them all at different times. But yeah, minus pitching my voice to be like Katharine Hepburn, which has served me well in my professional career, my other mimic attempts have failed me.

I hope most people figure this out earlier in life, but for me, it took having kids and thinking about how I wanted to raise them as the world darkens around us to try to parse what was performance and what was authentic in my voice. To that end, I've spent the last year+ trying to figure out how I do sound and how I want to sound. I've never heard of anything called feminist voice lessons. But my god, is there a need! How many women out there are also increasingly tired of sounding comfortable or palliative--silent? Me, I want to be able to SHOUT. I want the voice that parents use for monsters and heroes in kids books to be as naturally high-pitched as mine. Why can't a soprano ROAR?! And I want to be able to hear, breathe and sing in tune with the quietest voices around me--for our harmonies to ring the overtones together until the ceiling cracks.

But there isn't one natural way of speaking and singing. The sounds of our voice vary tremendously across cultures and time. Of course, there are some underlying unifying themes, like whether you are producing a resonant sound (versus breathy) and whether you're using a chest voice or head voice. But all bets are off otherwise. And there is nothing but valence knotted up in how and what you say. Codes, accents, pitch, volume, body language, hair, clothes, pockets, the right to breathe deeply, etc are the constant companion of people whose voice is discouraged and/or silenced by those in power. (I acknowledge myself as largely being in this latter category of the privileged. Yet here I am ...)

I think this is why I am drawn to write books that have multiple voices ("multi-POV narrators"). The idea of a single-voice narrator terrifies me. Maybe that's a good thing. Maybe not. But yes, someday soon I'd like to feel completely comfortable singing, speaking and writing in my voice alone. I may not like how it sounds. I may wish for something smoother, easier, funnier or more stylized. But no. When I speak, I don't want to be defaulting to anyone's battle-tested talking points, using body language that will win me friends and influence people or putting you anymore at ease than I happen to feel if you're going to be creepy. I just want to mostly speak, write and sing with truth in all ways--don't we all? And today what I want to say is that I think it's a crime that no one ever taught my mom to shout.