The Seduction of Paper 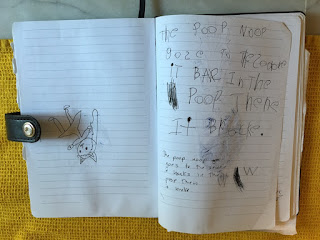 I can't stand the idea of keeping a diary, or a reading inventory. But I've rediscovered the joy of toting around a journal this past year. I even have a purple and white pencil pouch to keep me in pens, mechanical pencils and hand sanitizer. (I liberated the pouch from my daughter, who was concerned that it was no longer in fashion--in first grade.)

Like a lot of people, I've been trying hard not to spend as much time on my phone, particularly when I'm with my children. I've deleted social media minus the apps that let me chat one-on-one with my actual human friends, which has helped a great deal. But this journal has been the special detox booster ingredient in the blender. Now when I'm in a place of pause--cafe, waiting for lunch at a restaurant, long train ride, etc--my first move is to whip it out instead of my phone. Though yes, often it's my Kindle if I'm alone.

There's something mesmerizing about the blank paper and the draw to create without judgment. My kids can't decipher my handwriting--I can't decipher my handwriting--and I often never return to look at what I scrawl. But it's such a wonderful, different energy to use those moments to create, produce, stream, instead of scrolling through my phone. It's a dive into a pool to splash around for fun instead of an interregnum spent eyeing other people's nicer clothes in the lobby before the doors open and you realize your seats suck.

It's also, of course, deeply practical. My kids have consumed about half of it with their drawings and poems while we're in limbo somewhere. The above poop-bomb is fairly representative. And I use it to write letters to far-flung friends (another rediscovered joy) and sort out story lines and motivations, draft the occasional chapter, etc.

I remember using notebooks to make "LIFE GOAL" lists when I was younger. I unfortunately neglected to save any of the lists, though I am keenly aware of one perpetual goal that I've failed to achieve: I have yet to conduct the Verdi Requiem. (I'm coming for you, offstage trumpets. Someday.)

But still, it's been nice to have a journal that is entirely lacking in purpose. That is entirely in service of the hazy, unbounded present tense. At some point in the next few months, I'll recycle it and move on to a new one. And I think that's OK. It's the feel of the open paper and pen, and the sense that there's value in thinking through things in privacy, that will stay with me.