10 Practical Tips for Crossing the Country By Train 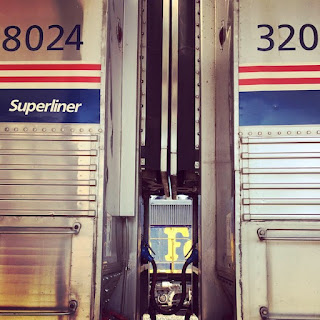 I just got back from a trip to Boston and New York City via Amtrak. And seven train rides later, a lot of propane tanks and hours and hours spent getting a hard-fought 4% of the way through Infinite Jest, I am home, and much the better for the journey. Crazy, right? But I grew up using Amtrak coach seats to get from our home in Chicago to visit family on the East Coast, Florida and Washington State. And more recently I've gotten my kids used to taking a sleeper to get up to Portland and beyond to see friends and family. So riding the rails isn't strictly anything new for me.

But still, it is actually. Every time. 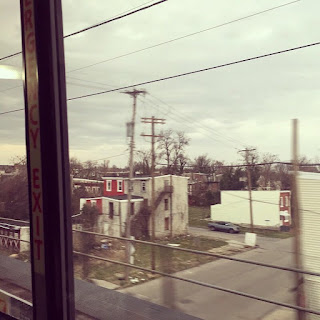 Indeed, many things went wrong on my trip. Very, very wrong. But honestly, none really mattered in the larger scheme of things; I was there for the journey. Nonetheless, I thought folks might appreciate some practical tips for taking a long-haul train ride (this NYT article is short on details), so below is a list of 10 random observations and pro tips for your next long-distance Amtrak trip. God speed and abandon all expectations. 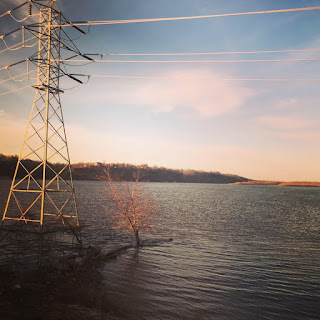 
10. You Will Visit Chicago. When I worked in Chicago years ago around railroad people, I learned an old saying: "it takes a day to get from the west coast to Chicago, a day from Chicago to the East Coast, and a day to get through Chicago." Which is to say, Chicago has rigged the system so almost all rail traffic goes through its streets—making a dollar out of 15 cents. They certainly got mine. Thanks to severe flooding in the Midwest, my train from Oakland to Chicago got rerouted onto congested freight rails in Omaha, delaying us by 10 hours, so I had a whole extra day in my hometown. Twenty-four hour layover plus complimentary nice hotel room and some taxi and food vouchers to be exact. Which, frankly, was awesome. (Hi, Kath!)

Pro Tip: Pack flip flops or (grippy) slippers for the train. You'll want/need to wear them to walk around the train if you don't want to have to keep taking your shoes on and off. If you're in a sleeper car and want to use the shower, flip flops are the way to go, of course. 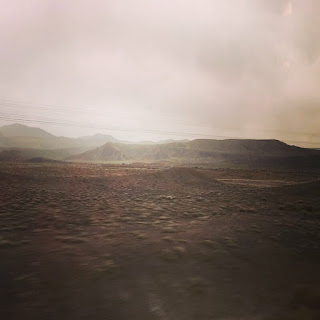 
9. Best Graffiti. Coming in to Philadelphia and Albuquerque. With a nod to L.A. for sheer quantity.

Pro tip: Prepare to live without wifi. Amtrak provides wi-fi on the trains East of Chicago and in the station lounges, but not on the trains operating west of Chicago. The East Coast wifi was pretty good until too many people started watching Animal Planet or something. Then it became a source of _singular_ rage. On the western trains, don't expect to depend on your data plan to get you through unless a) you want to pay a LOT of money shredding your plan to bits and b) you have some way of filling in service during the many looooooong gaps in cell service. Download all books, movies, shows, etc before you go. And maybe just spend time looking out the window? 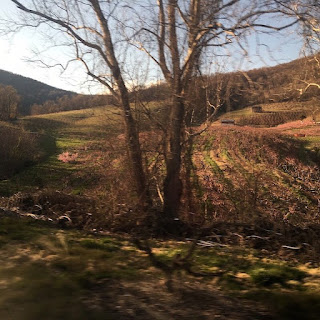 
8. Virginia, I Do Declare! True story: When my train left New York Penn Station and hurtled south into New Jersey and beyond, I started to seriously panic. As in, shouldn't we have been heading north and/or East towards Chicago?! But it turned out I was on the Cardinal, which loops down through the southeast via Charlottesville and then up to Chicago, in roughly the same amount of time it takes to head to Chicago directly. I'm not going to pretend that it was magical to go through Jersey, Philly and Baltimore (sorry, no offense). But oh my was it fascinating to go through Virginia! I had never been to the rural parts of the state, and was just tickled pink by the curlicue loveliness. Put another way, if the U.S. were, say, a fairy empire, Virginia would definitely be the Spring Court, perfectly sparkly delicious in its soft greens, blues, pinks and browns, and peach sunsets to tinkle your bells at the moon. I do declare, I do.

Pro tip: Pack an eye mask and ear plugs, if you're in a sleeper. You'll sleep way better. If you're in Business Class or Coach seats, pack a blanket and an object that can double as a pillow. Also bring a money belt, and choose your seat mate wisely. (But don't worry, the seats in Business and Coach really are remarkably comfortable.) 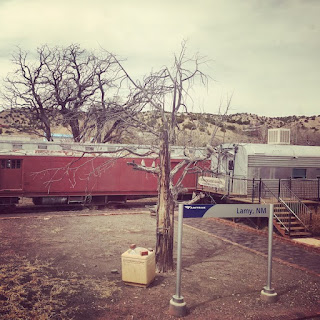 
7. Hidden infrastructure and people. You see things on Amtrak that you just don't see any other way, from the insane hidden levels--emphasis on the "s"--of train tunnels in Chicago to the belching industrial backbone of the East Bay to the enormous homeless population trying to eke out a life in the cracks of our vast national infrastructure. Salinas and LA had especially visible homeless populations, but folks were truly absolutely everywhere in some form or fashion, coast to coast. Everywhere. We really need to do better.

Pro tip: If you're a picky eater, bring your own food. If you're in Coach or Business Class, you'll have to pay to eat the food in the dining car or the lounge if you don't, and it's not the healthiest fare. (Pretzel calzones only sound like a good idea--take my word for it.) In Sleeper Cars, all meals are included as part of your ticket. You can eat in the Dining Car at the communal tables or get your food to go to your room via your attendant. But the menu doesn't really vary, and is heavy on the salt. So if you're picky, it's a good idea to pack your own food. 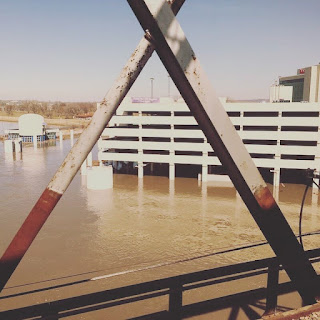 
6. Iowa Is So Charming--No, Really! I grew up in the Midwest, so I don't have a whole lot of patience for the claim that it's a beautiful place; I have actually been to Indiana. But Iowa and parts of Western Illinois really break the overall mold. They're not quite as gothically charming as lush Virginia, but they stick out as the bucolic wonders of the heartland when you get a good look at their baroque hayseed twang and pitch perfect farmhouses dotting the rails. I'd call it the Clapboard Court of the fairy empire, southern neighbor of the similarly picturesque but paranoid and feral Hidden Gun Bunker Court of Michigan.

Pro tip: The Train is Bumpy. The exact level of bumpiness varied a fair amount depending on route and speed. The Superliner, double-decker trains that traverse the western part of the country are not that bumpy unless they're going super fast, usually at night. I slept pretty well on those trains after the initial adjustment. The single-story trains on the Eastern part of the country are bumpier in a much ruder way. In fact, the Lakeshore Limited was joltingly, send-you-flying bumpy, especially when it raced as fast as humanly possible through the mind-numbing flatness of Indiana and Ohio overnight. (Though, can you blame it?) 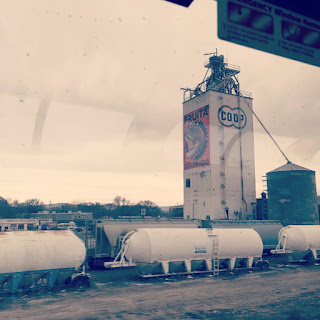 
5. There Are So Many Propane Tanks In This Country. That is all.

Pro tip: Bring your own (downloaded) music. You know what's even better than staring out the window for hours on end? Staring out the window while listening to music. It's wine with cheese, truffles with mouth. But if you're relying on the oversubscribed Internet or your data plan to listen to your songs, you will be sorely disappointed. In retrospect, I wish I had brought a secondhand iPod mini full of all the music I've ever wanted to listen to with me on my trip. Maybe my old yellow walkman--I miss rewinding. 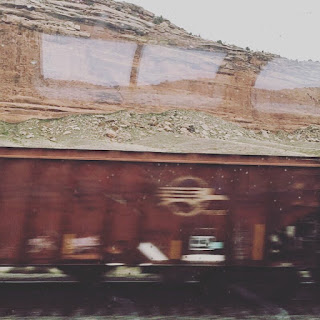 
4. Colorado Will Break You. One of my recurring nightmares as a child was of me trying to swim in an impossibly deep swimming pool, often filled with sharks. And that, my friends, is Colorado, minus the water and predators. Again, no offense to the many wonderful people who live in the state, but something about all the impossibly tall mountains, landlocked and never-ending, made me feel like I was losing my mind. California and Massachusetts, by comparison, have a clear progression to their topography: coast, valley, mountains, great flatness beyond. You are oriented and the road is finite. But Colorado just is--vastly. All that said, the scenery through Colorado is absolutely stunning, from canyons along the Colorado River to a 10-minute-long tunnel that takes you the highest of any Amtrak train in the country (~9,000 ft). I admired you, Colorado, but I can't handle you.

Pro tip: Take all the fresh air breaks. Some train stops are just quick ones for the people getting on and off. But others are slightly longer "Fresh Air/Smoking Breaks." (There's some irony there.) And still others are extended breaks for refueling and trash removal. I strongly recommend always getting off the train for these breaks unless you're asleep, even if you just spend the time pacing in front of your train car avoiding eye contact with other passengers. Fresh air will keep you sane, and there's something kind of amazing about standing in so many different towns and cities in one day and experiencing how different the air feels. 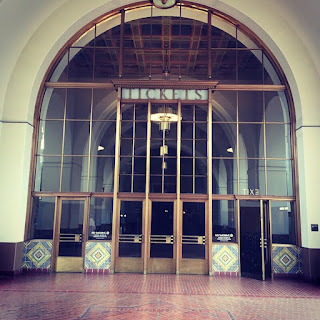 
3. Best and Worst Stations. Notably awesome include Denver, Los Angeles and Boston South Station. Notably awful is, of course, NYC Penn Station. The coffin-like ceiling heights and rat maze warren will always make me feel like I'm in some cruel science experiment. Even for New York City, which I adore, it's sadistic.

Pro tip: Don't expect to charge five devices at once. You get one, maybe two, power outlets in a sleeping car. 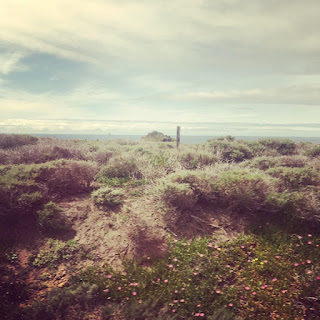 
2. California: Stop Being So Pretty. The Coast Starlight is char-mant, the twirling darling of the Amtrak fleet, mostly because--yeah--California is undeniably beautiful. Dramatic coastlines, fields of yellow and pink wildflowers, thunderous waves. I was coming home when I was on this particular train, which made it all even more magical and aching. That said, it's also sort of upsetting after seeing so much destitute poverty; the difference between Chester, PA and Santa Barbara, CA in just 48 hours is stark.

Pro tip: Kids on board. I took this particular trip without my kids. And I'm not sure if I'd want to take them at this age on such a long trip, maybe just to Chicago to visit grandma. My kids love train rides because it means UNLIMITED SCREEN TIME and eating in the Dining Car when we go up to Portland. I love it for the peace and quiet and the chance to read. These things are sometimes simpatico, sometimes not. Though I did miss my children (and husband)--terribly. My daughter built a shrine for me while I was gone. 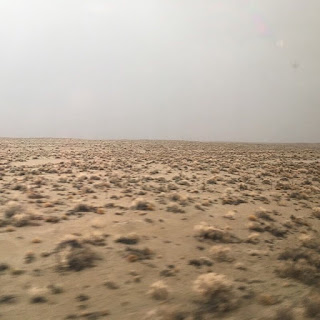 
1. I Did Not Finish Infinite Jest. Long-haul train journeys are nothing but time, ripe for contemplation. But honestly, not enough to make me want to finish reading that book. However, I did plot out a new novel, read five other books and think deeply about what I'm doing with my life, water geopolitics, housing policy and the relative pros and cons of toilets in sleeper car rooms. (On the whole, con.) But no, I did not finish that book. 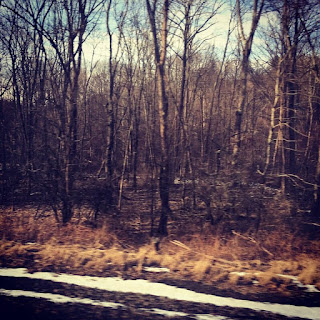