Recent Books I’ve Clutched In My Hands With Joy: November 2019

This is the time of the year when I need books with claws. Fire-breathing, taloned stories that don’t let me go. There just aren't enough hours after the school year starts for anything else. So yeah, I read about dragons. 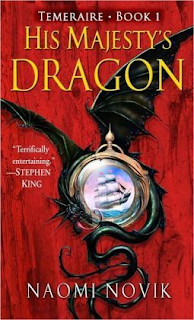 This is a nine-part series, plus a few more associated novellas, and I've only read three of the novels to date. So maybe it'll go horribly wrong still. Thus far, though, Novik has written one of the most surprisingly addictive buddy sagas I've ever had the pleasure of reading. (The buddies being a former British naval captain and an unusual, Chinese-bred dragon.) I wasn't immediately sucked into the story, but I'm so glad I stuck it out, because once you meet the dragon, Temeraire, it's impossible not to love him. Novik is just a damn good storyteller with marvelous attention to detail, and Temeraire has questions.

The plot unfurls during the Napoleonic Wars, with the added intrigue of a world and war fought with dragons. Wickedly smart dragons, simple dragons, fire-breathing dragons, acid-spitting dragons. Something called the Divine Wind. A lot of discussion of food, baubles and manners. It's all lovely. Plus, so far the books have taken me to England, Scotland, China, Africa and France; you can imagine the world-building associated with dragons in all these places is quite ... toothsome. This is vessel combat with a lot of pleases and if you wills, my dear sir: All lies well. 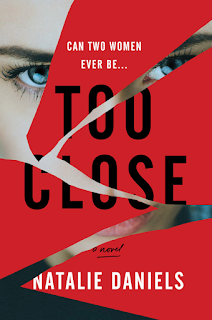 Too Close by Natalie Daniels

The story is about a married woman who, thanks to tangled relationships with both her best friend and husband, goes far, far down the rabbit hole. It's an intense emotional journey that takes a conventional white British mom well out of her expected place in society--with a lot of dark but charming humor. There's acid thrown on faces, kids driven into rivers, school recitals and insane asylums involved. In fact, maybe this started as a more standard woman-in-danger thriller. Maybe. If so, though, I feel like at some point Daniels said fuck it, I'm angry and hurt, the world's going to shit and I'm going to write what I really want. I know from personal experience that it takes a lot of raw feeling to write a book even a fraction as emotionally competent as this, and I hope Daniels bled herself dry of tears in the process.

Yet yet yet ... here we have this completely misleading cover. Because women won't read something that isn't a thriller about your evil best friend and cheating husband, and men can't be expected to read about a woman's emotional journey?! (Rhetorical questions. Deeply rhetorical.) Personally, I would have read it in a paper bag. 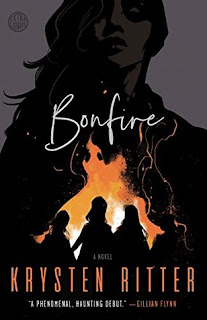 If Too Close is a literary novel (literally) disguised as a thriller, then Bonfire is a sexy thriller dressed as a sexy thriller. It's a classic sort of successful but damaged young woman heads back to her hometown from the big city to solve a problem that happens to be linked to a lingering violent crime that has haunted her for years. It's a little bit of Erin Brokovich with a polluted water theme, but meets Before I Fall's teen girl aggression story line plus the less awful parts of The Girl With the Dragon Tattoo and a healthy dose of sex. All very fun when mixed together with Ritter's well-paced, snappy writing. You're not going to cry when you read this book, but it'll be heart-pounding fun and good reason to spend some quality alone time for a few nights while still feeling assured of your inherent coolness. 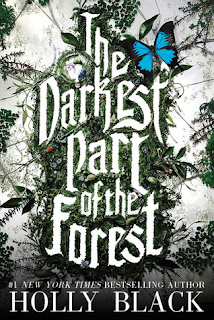 The Darkest Part of the Forest by Holly Black

There's a glass coffin holding a beautiful, unknown faerie prince sitting in the woods of a small American town, where generations after generations of local teens go to party. Then one night the coffin is broken open, and all hell breaks loose. Boom. There you go. It's kind of where you want Riverdale to go at this point. In fact, this YA book is just screaming for a TV show or HBO limited series. Screaming. Besides being deeply cinematic, the writing is an open major chord in the second inversion with a few surprises hidden in between the more familiar notes, which makes it extra fun. For one, I appreciated that it's a gentle romance for both of its main characters: a straight teen girl and a gay teen boy. For another, there's thrift store clothes shopping afoot. (Small detail, but I spent a lot of time thrifting in high school.) Absolutely tell your teen that you forbid them to read this book.

Recent Books I've Clutched In My Hands With Joy: September 2019