Posts for the End of the World: Smog and School Choice 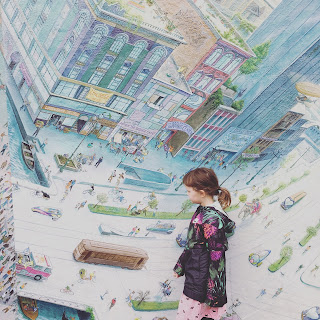 In front of a Mona Caron mural of the ideal future of San Francisco.


It’s school application season in San Francisco, so all the big feelings are ricocheting through the white parenting Internet—a vast, mined virtual playground where YOU WILL BE POLITE no matter what heinous things other people say. For folks whose kids will soon begin kindergarten or middle school, particularly us moms, it’s like getting 1,000 doses of Glamour magazine shot into your veins every time you log in. (This is not a good thing.) It’s a blood sport, it’s sex with an algorithm, it’s who you know, it’s rigged. Etc.

In other words, smog is poison to the unprotected soul.

But, thankfully, there’s a vaccine: thinking critically about what education means to you and to society and then removing yourself from the smog. Indeed, I know for a fact that a teacher cries every time a mom posts, “What are the best schools?” on Facebook ... My friends, that’s about as useful as posting, “What are the best foods?” or “What are the best husbands?!” (Though I think someday I will post the latter, just to see what people say.)

Do I sound smug? I’m not, just tired. Deeply tired. My kids have been to so many goddamned schools in their short lives; you have no idea. Why? My own idiocy, unforced errors, bad luck, the cold-hard facts of logistics come home to roost. Mea culpa. I know the process to transfer at the school district better than most, know which bathroom stall I prefer to use at the EPC. I’m on camera crying in the hallway.

So perhaps even more than your average parent, I know how important it is to ask yourself: what is education? What should school be?

We’re all going to have somewhat different answers to these questions, depending on our values, particularly when it comes to be anti-racist or not [clears throat loudly]. But there’s a basic fact that we can do ourselves a favor and face asap: we are not preparing our kids for utopia. In fact, barring a massive and immediate change of behavior by every single one of us adults [clears throat loudly again], our kids are going to inherent the opposite. A shit planet. War, famine, mass migrations and Earth-wide social upheaval—friends, I don’t even know if Netflix will still exist, let alone college!

So those glossy brochures from private schools promising honey, wine and the wholesale transformation of your larval child into the uber-CEO of the future? ... Let’s be honest: Unless they’re boarding the kids in space, you’re smoking crack.

And yet white parents like us can’t get enough of this stuff. These promises. If we could burn, powder and inhale admissions brochures, you know we would. It would be the new Adderall, but ... leafier.

No, our children have much bleaker futures. Democracy will not be a given. All those coding camps we paid an arm and a leg for? Probably most useful for hacking the few multi-national corporations that will survive and hoard resources as they get more scarce. I’m only sort of joking; we’re in a real pickle here.

So, school. What to do? Well, leaving all efforts to be anti-racist and civic-minded aside (which—actually, don’t), the individual skills our kids will need to thrive in the future look very different from what gets sold on those brochures and chanted as The Word in the parent groups. It’s more like ...

Aka, unless we have a space station ready for our tiny gods, the best we can do by our kids is to teach them to be the best possible humans. Not learners or achievers, but intelligent humans.