The Journey is the Life: Sacramento

A few years ago I took a trip to Copenhagen, Denmark with my husband and kids that started with a walk down the hill to the MUNI bus and then ended with a local bus trip from Copenhagen Central Station while we were out of our minds tired. Thousands of miles begun with a simple tap of our Clipper cards, and partly in Danish. Some folks may call this nuts; why didn’t we just take cabs? But for us, this is the special sauce of a good trip. The travel is the trip. Even when it goes wrong. Or they serve you reindeer meat on the plane.

Indeed, since then we’ve taken more and more trips that begin with a walk to the bus stop and involve a long train ride. Most recently: Sacramento. My older kid couldn’t get over how flat it was there; the Midwest of California.

Now it would have been easy enough to get a Zip Car and drive a few hours to the Central Valley, park and look at stuff. But where’s the fun of that, right?! Instead, we made it a totally car-free trip in roughly the same amount of time, and got to experience some fun new things and have some family bonding time that didn’t involve vomit in the back seats or surreptitious farts in closed quarters. Just a lot of 20 Questions, snacking and illegal Scoot trips. 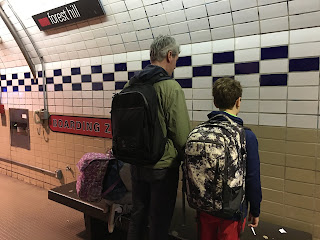 The one backpack rule.

1. MUNI to the Embarcadero

Now that our kids are in elementary school, the rule for traveling for short trips is, if it doesn’t fit in your backpack, then it stays at home. We all carry our own stuff, plus parents toting snacks and water. This wasn’t possible when my kids were younger, but now that they can, they do. 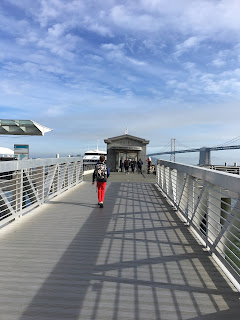 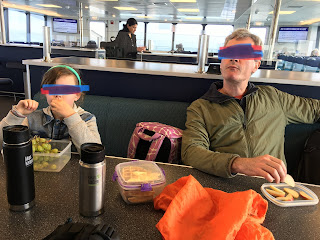 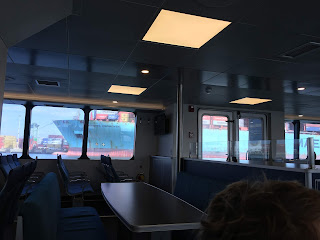 This was my husband’s (good) idea. We took the ferry from the Embarcadero over to JLSq, which was a beautiful, calm and easy ride, putting us a short, partly car-free walk to the Amtrak station. The ferry stops in Alameda first, but that just means more time to do the thing my kids love best: snack. 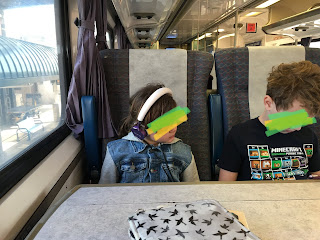 Wi-fi, take us away.

These Amtrak trains have WiFi, so, well, enough said (though props to my older kid who was banned from using any gaming apps for the entire weekend—he spent the ride making an icon of our cat appear to follow us along the rails in Google maps, and then cheering him on). We got an old Amtrak car on this leg of the trip, which wasn’t as lovely as the newer ones, and the toilet flush button didn’t work, which was just nasty. But it was cozy, comfortable and easy—and of course, scenic. Plus: more snacking.

4. Walk to our hotel on the riverfront

I got a little confused with the walking directions from the train station to our hotel. There are a lot of freeways in the way. But we ended up stumbling through a tiny Chinese mall and then some sort of stadium mall. At that point, though, people’s energy was flagging from all the walking, so we stopped for ice cream sandwiches at the mall and enjoyed some well-placed chairs and couches (my go-to long walk bribe). After that, it was an easy walk through Old Town to the Riverfront and our hotel. For better or worse, my kids quickly spotted all the candy stores in Old Town as well as the ubiquitous Scoots.

Bonus points: the hotel had an indoor pool and hot tub—and TV! (We don’t have a TV at home, so this is always the big excitement about staying in a hotel.) So many re-runs of Teen Titans! 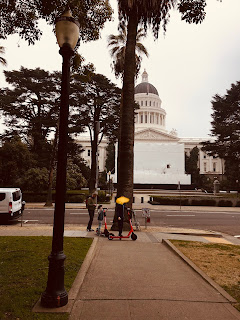 Scoot-ing to the capitol building. Always a popular, and functional, bribe. 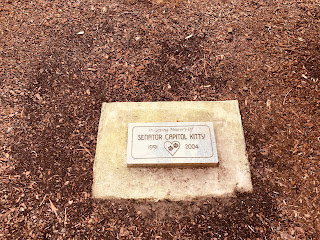 Spotted on the lawn outside the building. 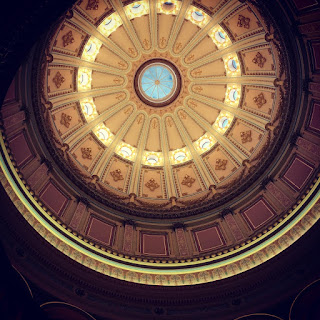 The capitol building is as lavish as a European palace. 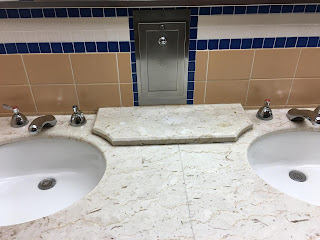 Indeed. Why buy just one marble counter, when you can add an extra layer of marble counter to catch soap seems to be the spirit of the decoration theme. Also: excellent public bathrooms. 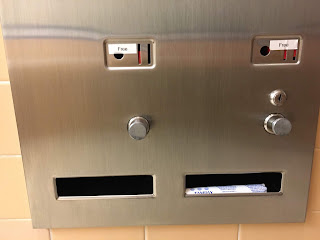 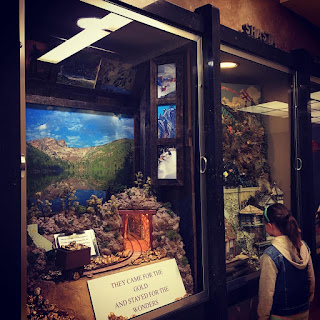 My younger kid loved the county dioramas on the bottom level.
After all that complaining about going, she didn’t want to leeeeaaaveee mom!

Okay, so here’s the thing about visiting places that you know your kids will like, but they are dead set against visiting: you make it fun to get there. For our family, that meant renting two of the ubiquitous Scoot scooters and breaking some laws to go the few blocks from our hotel to the capitol building. My older kid can ride one independently and my younger likes to ride doubled up with dad; for me, I get a chance to walk at speed, alone, at peace, no one bothering me, no demands, far away while they jetted off with my husband. Get it? And yes, my kids totally loved walking around the inside of the capitol building after all. There was particular excitement about spotting the official state laser printers. 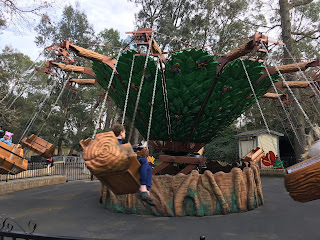 Funderland is a small enough park that you can give your kids tickets to burn, then sit back and chill while they go nuts for a few hours. 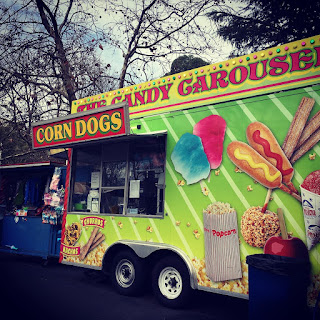 Sadly, the only food option. Next time we’ll pack more. 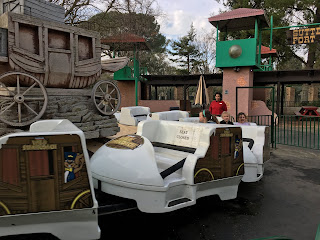 If your kid(s) are only into massive, stomach-churning thrills, they’ll scoff at this place.
But my kids are still wonderfully wimpy in this respect—though I could barely handle the small rollercoaster.

I’m surely not the first person to snort a little at the name of this small public amusement park in the enormous William Land Park, given that Sacramento is oozing with politicians. But whatever, we took the local light rail out to the nearest stop and walked a ways to and then through the park. It was a long walk, but we got to see a lot: a house with a dozen cats, a bike race, some sort of dance team practice and some nice big sticks. Funderland itself was very sweet and just the right scale for this sort of trip. Kudos to the really nice staff for being extra supportive of a neuro atypical kid who was having a rough time with one of the rides while we were there. If we had more time, we might have also visited the Fairy Tale Land place next door.

We took the bus back to our hotel after a few hours at the park, a few churros and more nachos than I care to remember later. It was another night of TV and pool/hot tub fun. Bonus points for the cafeteria in the hotel so we didn’t have to go out again. 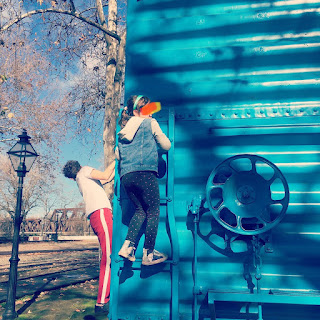 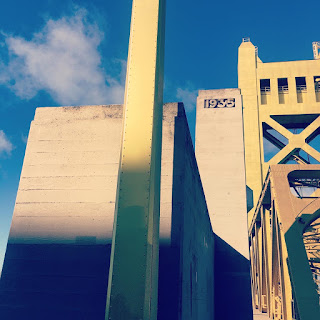 The yellow-looking bridge over the river turned out to be gold, which was appropriate and fun to notice. 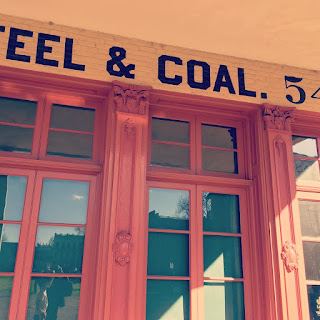 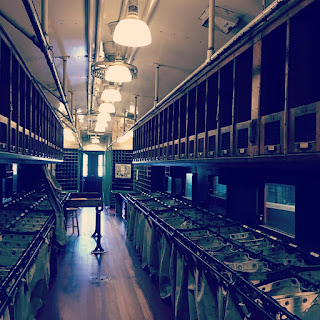 The mail train on display at the awesome train museum in Old Town. 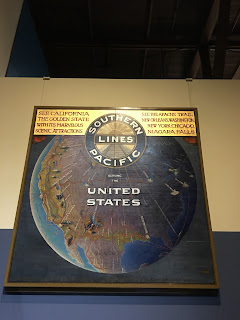 Some provoking history at the Train Museum.

On our last day in Sacramento, we tried to keep it simple. We wandered through Old Town and then to the State Railroad Museum, which turned out to be especially awesome—like, awesome. All capped off with giving my kids a small allowance to go nuts at Candy Heaven on the way out of town. My oldest bought “coal candy,” which, appropriately, had no flavor after the initial bite, and my youngest bought all the worst things in the world—currently shedding isotopes in our kitchen.

Getting Back to San Francisco


1. Walk to Amtrak at Sacramento Valley

We knew where to go on the way out, so it was an easy, quick walk back to the train station. In case you want to make the same trip, note that Google maps is totally wrong because the fast way involves using some stairs through two malls. You pass the California Fruit Building, which was a big moment for my fruit-decimating kid.

We got a new car on the way back, so the ride was even more comfortable and lovely. My kids spent the entire ride snacking and reading, and I got to stare out the window at all the beautiful greenery. The bathroom toilet flushed. All that said, my husband and I got into a small fight about where to get off and how to get home right before we had to decide. I forced us off at Emeryville, which probably wasn’t the right decision, but whatever. There were no bad choices, only years of pent-up resentment to air. (Love you, Jake!)

After the initial confusion of getting off in the wrong place, we had to improvise a bit. So it was a fairly empty bus to West Oakland BART and then a short BART ride. Someday someone in government will wonder why we don’t have direct BART connections to the Amtrak stations in the East Bay (update: minus Richmond, which is further north than we planned to board). Are the rails allergic to one another, friends?!

We switched to MUNI, though, at Embarcadero after the BART conductor announced we’d be stopping for 10 minutes. By this point we were running on a low tank, energy-wise, but I think because we take public transportation and Amtrak so often, this kind of thing doesn’t phase us as much as it could. So yeah, we made it home not long after, got ready for Monday and everyone slept well that night. Unusually well (did I mention that I slept on a pull-out couch all weekend?) Trip successful! My kids truly believe that Sacramento is one of the dopest places on the planet. We’re that magic.