Recent Books+ I’ve Clutched In My Hands With Joy: March 2020

So, we've officially entered hell. What can I say? Thank god for books, movies and more. I'm short on time these days thanks to homeschooling on top of work, constant anxiety and everything else, but I've still been able to carve out time to be transported by powerful stories. We need them more than ever right now. Hold the line, everyone, and health and comfort to you. 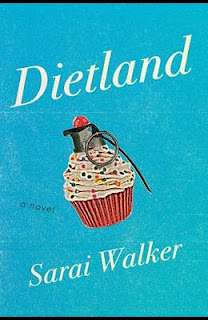 The common theme through most of the items I'm posting about this month is art. As in, these stories are all art. Take Dietland. Walker went a little easy on us in the second half, likely in the concern that the story wouldn't be commercial enough to sell--I get it, though for the record, I'd love to read a whole separate action series about the feminist terrorist/anti-terrorist organization, Jennifer. (I mean, just naming it Jennifer ...) But it doesn't matter. The story about a fat woman initially hiding from the world in Brooklyn until she can get her stomach stapled and begin living as a thin woman is so beautifully honest and brutally pleasurable that it's a crime that Walker isn't selling posters with that epic list of lipstick colors that punctuates the middle of the book. 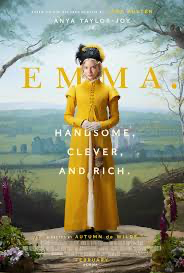 One of the common misperceptions of Austen's novels is that they're great because of the archetypal romances and main characters. That's certainly true, and many a rip off has banked on the idea. The truth, though, is that what sets great Austen apart from poor imitations is first and foremost the rich world of ever-green secondary female characters. Would Lizzy Bennett be half as interesting without the foils of her mother (the unapologetic social climber), her array of sisters (the good girl, the wild girl, etc), Caroline Bingley (the frienemy) and even Lady Katherine DeBourgh (the false feminist icon)? Would Darcy? In Emma, would Emma's otherwise ho hum romance with Knightly work without Harriet Smith (the friendship that begins with a messed up power dynamic) or Jane Fairfax (the woman you're supposed to like but actually can't stand)? No. Take Clueless; Cher without Dionne just doesn't do as much for a girl.

So yes, watch Emma to experience living in a Farrow & Ball home without paying Farrow & Ball prices, the delightful appearance of Bill Nighy as Emma's father and, certainly, the excellent choice to make Mr. Knightly much hotter and gothic than previous adaptations (sold!). But most of all, watch it for the friendships and how they turn us into the women we want to be. 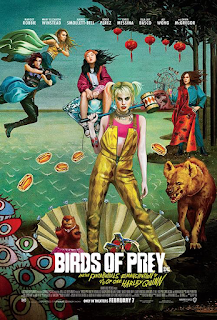 I should caveat this entry by saying that I a) cannot handle horror/gore/violent films and b) know nothing about the comic book backstory of Harley Quinn, and don't want to. Nonetheless, I walked out of this film, eyes wide with shock at having witnessed a couple hours of legit a-r-t. Because underneath the incredibly graphic violence (there's a scene towards the beginning involving knives and faces that I just couldn't handle in particular), this movie delivers consistent, meticulous attention to story craft and visual delight that I have rarely seen in an action film. Just next level shit; people are going to be writing graduate dissertations about this movie.

The crux of the story is that Harley Quinn has just broken up with the Joker (good for her, never liked the guy) and, having lost the physical protection of their association, is hunted down and forced to do dirty work for a bad guy involving a kid and a stolen gem. As you might expect, she ends up joining forces with the kid anyway, as well as a group of other kick-ass women of varying unexpected talents, and they collectively protect the kid from the bad guy. Again, I cringed through about 80% of the violence; it really was horrible. But things like the lengthy homage to a bodega breakfast sandwich, a major plot line around a girl needing to take a shit, the humor of the lead characters, the characterization of the villain (perfectly played by Ewan MacGregor), the stop-action-to-lend-a-hair-tie during one of the fight scenes, the car chase scene that turns into a roller derby (so much more interesting than usual) made the violence besides the point for me. Plus, the return of Rosie Perez. I have to admit. I didn't know I needed that stuff in my life, but it turns out I do. I really do. 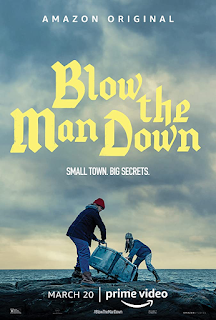 Blow The Man Down, Written & Directed by Bridget Savage Cole and Danielle Krudy

The last movie I want to hype is Blow The Man Down, an Amazon Original ostensibly about two young sisters in a small fishing town in Maine who have to cover up a murder. The sisters are great and all, but I suspect that someone forced the writers to make them the main characters purely for marketability purposes, because the real story here is a group of older women trying to take down another older woman who runs the local brothel, and the lengths they'll all go to succeed while protecting those sisters' futures. This is a quirky, blatantly atmospheric movie, determinedly slow to unfold. Lots of fish, boats, sea shanties, puffy jackets, knives, kitsch and pie. Guts. I was enjoying it purely for that reason, then I got to the part where the husband of one of the older women trying to shut down the brothel interrupts their meeting because he dropped his fork and needs a new one--he blathers about some sports game as they hide their annoyance--and I laughed my head off and knew I'd made an especially good choice of what to watch. The looks those women give each other and the husband is absolutely the gif we've all been waiting for. Please tell me it'll be a gif soon.

After the fork scene, things get darker and more interesting, and the real star of the movie, the woman who plays the brothel owner, emerges in full force. What a fun role to play. The cane, the accent, the fur coats and chutzpah--for an older actress, it's unfortunately vanishingly rare. Which is an epic shame, because it's all very delicious, especially against the stark background and in such capable hands. Too many people vastly underestimate what the older women in their life have seen and done--and what they're doing and saying behind closed doors. More, please! 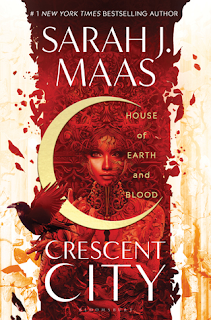 I wasn't sure if I was going to include this book in this list. I would not say that it's art in the same way as the stories above. There's a seedy dicklit feel to much of it, with some weird stuff about unicorn squishies, that wasn't really my thing. However, Maas is a pro at writing both a slow reveal and action scenes, so I'm including it purely for the pleasure of these two factors. Also, the book is quite long and an easy read, both especially valuable qualities right now thanks to the quarantine.

Crescent City is the first story in a series about a half-fae, half-human woman living in a city and planet organized around complex hierarchies of all kinds of non-human creatures, where humans are a despised, powerless minority. It's a story about living your truth in the midst of difficult times, and is also a romance with an angel. Yeah, there's a lot going on.

I've never seen the appeal of angel stories, but the sheer scale of the world that Maas has built in this opening book is deeply impressive, and the very lengthy battle scenes at the end are just super well done. Riveting. So yeah, I'd keep reading this series, for sure. It reminds me of Leigh Bardugo's Ninth House, but a total fantasy take.