A Short, Silent Meeting in the Wake of Another SFPD Murder

Last week, SFPD officers shot and killed Cesar Vargas, and gun violence continues to plague specific parts of town at alarming levels. So you would think this meeting would be occasion for the police commission to dig deep and ask the tough questions. But no. This was easily the shortest and quietest meeting I've witnessed to date. Only a few commissioners attended and, of those, only two spoke at all over the course of the whole meeting, and that was largely to ask housekeeping questions. It was a hopes and prayers meeting, not an oversight meeting. 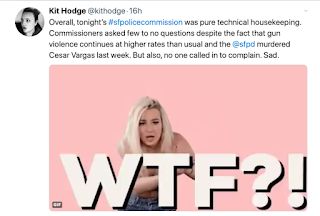 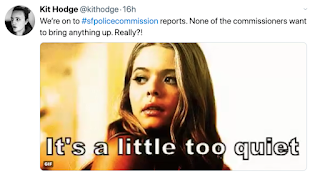 There was a brief presentation on projects proposed for funding from 2010 and 2014 general obligation earthquake safety and emergency safety bonds. These are big money projects. There were no questions from the commissioners. 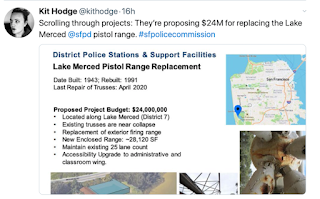 An SFPD officer presented the quarter three 2020 audit of SFPD's work electronic devices for evidence of bias. The audit flagged two texts, that will now be investigated within the year. 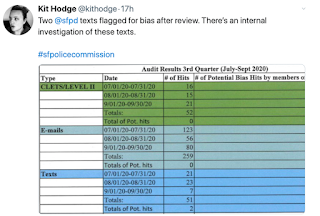 In past meetings it has become clear that the SFPD has not been cooperating with the Department of Police Accountability on data sharing, which has made the DPA's job even more difficult (and arguably, toothless). So there was a lengthy presentation on a new data sharing agreement intended to improve transparency and speed of investigations. I was hoping that this would be a chance for the commission to revisit the lack of follow up by Chief Scott on a notable number of DPA discipline recommendations, but again, it was not to be. It's not clear that the commission intends to revive the issue. 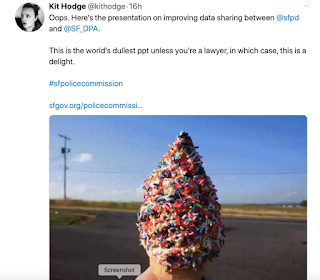 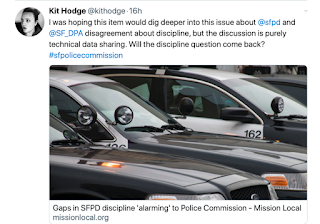 And with that, the quiet meeting ended in record time. Only two people called in to give public comment.
---
Before you go, take action! Volunteer for/donate to Wealth and Disparities In The Black Community, founded and led by Phelicia Jones. WDBC has been working on police reform and justice for victims of police violence since the SFPD murdered Mario Woods back in 2015.