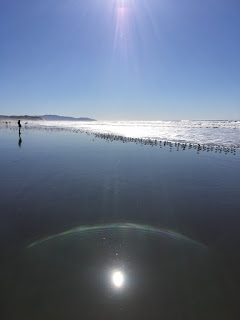 I've been struggling with vertigo over the last couple weeks. It started with waking up to violent spinning and nausea, and eventually subsided into a recurring low level haziness and headache. I couldn't think as hard as usual. I was tired. Things felt a little unreal around me.

The vertigo has been fading away, but the experience of feeling so out of sync with time and space reminded me about something I've tried to keep in mind this past year of the pandemic. That ideas live in our bodies. Ideas we take in become a part of our flesh and bone, and down and down into the microscopic quarks of our essence. We hold racism in our body and the way we respond to other people. We hold work in our bodies, too, training our limbs and faces to move in just the way that brings in money. We hold good ideas, visions of the future, history, plans for emptying the garbage, the feel of cat fur, catchy songs, etc. Everything is in our bodies, whether we like it or not.

The attempted coup on January 6th is the expression of so many threads in our national history, but it is also an idea made physical. This is mine, and I will destroy what it mine and you won't stop me because you are mine, too. I have held the dread of this kind of coup in my body for months and years. Five, to be exact. Today it has been merely a small headache, but in the past it's also been grinding teeth, a harder look at someone before I cross the street, a distancing from unconcerned people, a glazed hunch, a scream and a tinge of shame.

We also extend and lash our ideas into the land, too, but that's a whole other post.

So, this idea-body truth has been on my mind as I grapple with what I hope will be the tail end of my vertigo. The dizziness is both something purely physical related to loose crystals in my inner ear (an admittedly fabulous thought), and also a slightly too on-the-nose manifestation of how so many people have been feeling about the world this last year.

Yet, our illnesses are not only sicknesses, they're feedback loops. Similarly, ideas are dynamic and, if we're open to it, we can metabolize them before they kill us (all). If we're willing to open our minds to the idea that thoughts need blood and breath to live, it's not hard to imagine listening more closely to those loops within ourselves and then consciously processing the nourishing essences of a toxic idea, however microscopic, and purging the waste. We can make the deliberate choice to fill ourselves with truer ideas. Like COVID-19, though, it gets harder and harder to do the longer we breathe an idea in and out and the deeper we let a given thought into our bones. Witness the mob on January 6th, unable to keep their feet off Nancy Pelosi's desk. Those feet were an idea made manifest, hundreds of years in the making. Those bodies are new cells and sugars of a very old, apocalyptic idea.

I don't like this vertigo, but there is wisdom somewhere here. Maybe it's simply that radical imagination of a just future is a physical practice as much as a political one, and I need to do those exercises. Maybe it's dislocating to be so physically apart from people and so many of the things that ordered my mind before the pandemic; we've lost layers and layers of frequencies of the chords that used to resonate among us. Maybe, though, it's a reminder of how much gravity and flesh a toxic idea consumes when it's allowed to spread unchecked, when we tell ourselves that it's the cure and not the virus. My feet are, unfortunately, comfortable on other people's desks, too.

I don't like this vertigo, but it's speaking volumes to me.