Special thanks to Susan Boeckman for help tracking the meeting and fellow live tweeter, @jwaggo, for allowing me to publish her tweets here. That said, my views here do not necessarily reflect those of @jwaggo.

The key word in last night's meeting was strategy. Thanks to clear direction from President Cohen and the rest of the Commission at previous meetings, Chief Scott came prepared last night to focus on the what and why of policing. Gun violence in the Bayview and, to a slightly lesser extent, the Tenderloin, continues to soar; last week, six people were shot in a single event in the Bayview. Chief Scott discussed immediate and long-term strategy to stop gun violence, though still in loose terms. We have not yet gotten into data-driven and community-driven strategy analysis, the "but does it work?" and "how do you know?" part of strategy discussions. So while it was encouraging to see Chief Scott take this significant step forward, I hope he and his team are prepared to go much deeper and confront hard questions about a) what is actually working and b) how the agency is reallocating resources to support strategy pivot--and not just in the eyes of the police. Community impact and opinion has to be a metric here. Vice President Elias was very clear that she expects deeper work going forward, and President Cohen is putting a discussion of strategy about violence in the Bayview on the next agenda while reaching out to help from the Mayor's office and many others. She is digging deep. (Commissioner DeJesus, on the other hand, appears completely checked out; sadly, it's not even clear that she's listening to the meetings anymore.)
In addition to the strategy talk, Yulanda Williams from Officers for Justice made a fascinating presentation on the history of Black officers in SFPD that should be standard knowledge for anyone on the force, and the Commission considered but postponed an item on secondary firearms policy. See this excellent summary of these later items here, courtesy of Susan Boeckmann. 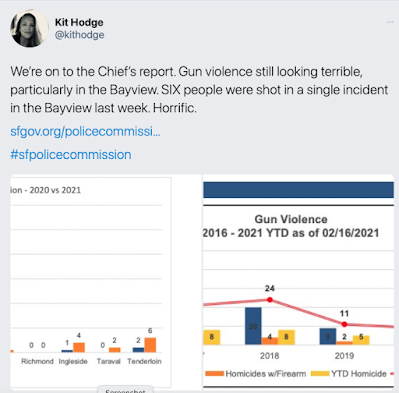 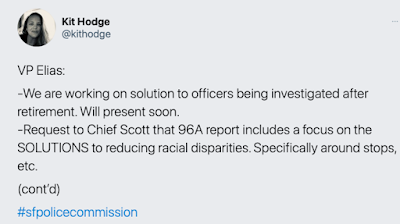 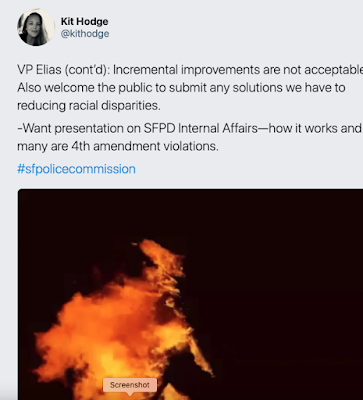 Last night, the Commission gave Director Henderson from the Department of Police Accountability some real talk, too. Wealth & Disparities in the Black Community has been raising concerns about DPA's lack of follow through on their recommended SFPD policy changes stemming from the murder of Mario Woods back in 2015. President Cohen reiterated her support of the DPA and its important work, but VP Elias and Commissioner Hamasaki nevertheless pressed the DPA to focus on strategy and solutions, not more audits. DPA sits on a wealth of community feedback about SFPD operations; the agency's job is to collect complaints and both adjudicate individual cases and look for larger trends that need to be fixed within SFPD. Director Henderson has pledged to give a presentation at a future meeting outlining existing and new recommendations. Let's hope he goes big. As VP Elias said last night, incremental improvements at SFPD aren't acceptable. They want solutions. 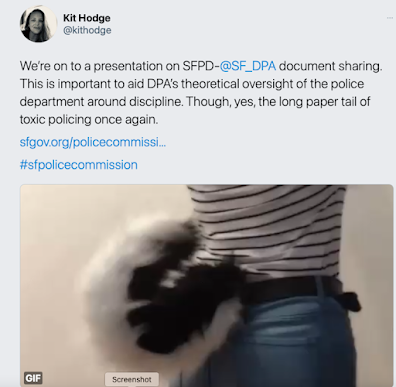 The other big news last night was the Commission's decision to reject SFPD's proposed budget. The item was at the very end of a long agenda, and I was already in bed, but I'm almost sorry I missed it. This was where the real talk between the Police Commission and Chief Scott got real real. As I've noted in previous summaries, SFPD is threatening service reductions and work stops on reform efforts if the Police Commission and Board of Supervisors don't give them all the money they could ever want. Aka, undo the very modest defunding from last year. But the Police Commission wasn't playing that game. They called Chief Scott's bluff, noting that there's no information in the high-level budget they've been presented no evidence that more money means more effective policing. Instead  it looks like the Commission will be weighing in when the budget appears before the Board of Supervisors' Budget Committee in a bit.
For a deeper dive into the budget discussion, see this excellent blow-by-blow summary by Susan Boeckmann.
I fully expect the SFPD and the POA to do everything they can to muster support for a budget increase, particularly with a city surplus now in play. So this should get ugly. Ideally, though, someone in City Hall is convening community and government leadership to talk about evidence-based, cross-agency community investment strategies that actually address the issues--like gun violence--that SFPD has been unable to solve through more policing. We need collaboration to reallocate SFPD budget intelligently and set up accountability systems, and a plan to advertising this new strategy well before budget season. We can't wait for Budget Committee hearings to do all this planning. If we're serious about solving these issues, the City needs to be bringing people and budgets together now.