The Limits of Understanding & Skill Sets

President Cohen has been working overtime over the last months to whip SFPD and the Police Commission into shape, and it shows. Thanks to skillful teamwork on the Commission, the body has uncovered more decrepit and toxic processes and standards within the SFPD than has likely ever been brought to light in decades. Through sheer force of will and skill (and often while simultaneously managing children on their laps), the team is trying to fix a rotting, broken system, salvaging as much good as possible with good government practices. No one should take this work for granted. It wasn't happening before, and it's only happening now because President Cohen, with the help of powerhouses VP Elias and Commissioner Hamasaki are spending enormous portions of their lives digging into the dullest minutiae of every possible document they can get their hands on, meeting with SFPD staff outside of meetings and asking pointed questions at Commission hearings. We could probably not ask for a better Commission leadership team.
However, despite this incredible work, the limits of SFPD's understanding of what reform really means and their basic lack of the skill sets needed to make fundamental changes on the force, are increasingly on display. Case in point, the Commission continues to push Chief Scott to think in terms of strategy, both in his operational choices and in what he brings before the Commission. Scott, though, doesn't seem to know what this means. Or, at least, has a very shallow understanding of strategy and analysis. (It's not anecdote and "we think," sir.) His response last night to Commissioner Brookter's questions about what SFPD's strategy is as San Francisco reopens was telling: more officers. That's it. That's Chief Scott's response to almost every problem: more officers.
So, I want to commend President Cohen and the rest of the Commission for continuing to push SFPD towards reform, but I do hope they're also asking themselves what happens when they continue to hit brick walls? Endless brick walls? What if this SFPD, despite some good intentions, is not capable of the level of reform needed to end the persistent racial disparity in policing? It was more than a little jarring to be discussing officer awards this week, after a series of yet more police murders and violent over response across the country. It's even more jarring that so few people feel that it's worth it anymore to direct their activism towards these meetings, despite such incredible efforts from some commissioners to solicit engagement. I would have expected far more people to call in last night, given everything going on. This isn't an indictment of the Commission, though; it's an indictment of the SFPD response to the Commission's efforts to give you a chance to prove yourselves worthy of continuing to exist. Real talk.
In less existential news, Commissioner DeJesus is apparently stepping down. She went out stronger than usual in this last meeting, after something like nine years on the Commission. Best of luck to her in her next chapter. 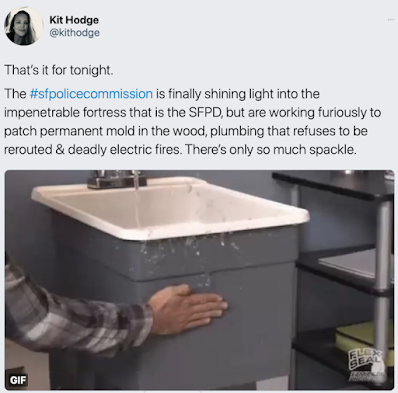 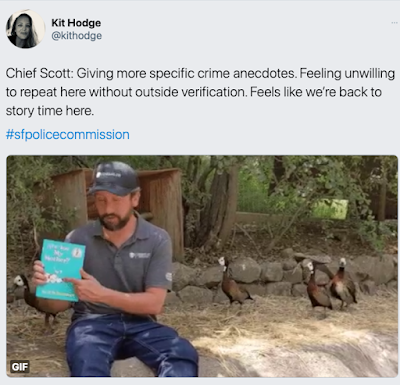 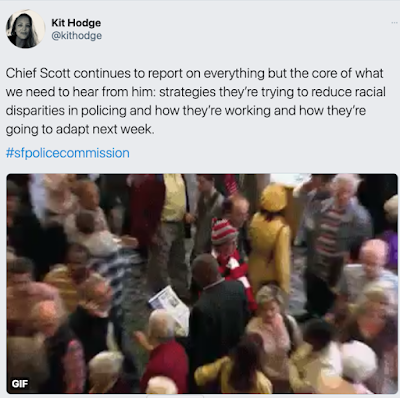 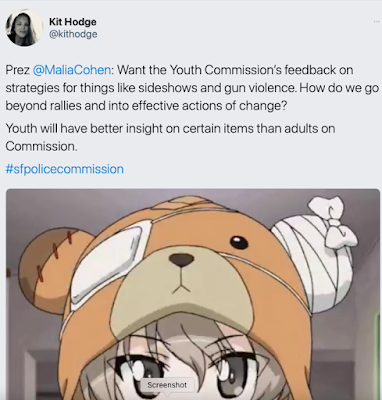 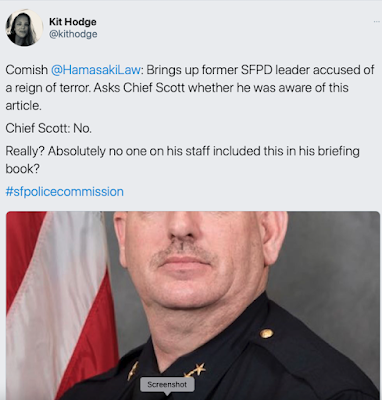 Unsurprisingly, traffic stops were high on everyone's minds last night. Though there was no formal agenda item on the topic, we should expect concrete proposals for ending certain forms of traffic stops and searches to come before the Commission soon. Instead, the major item on the agenda last night was the Firearm Discharge Review Board & In-Custody Death Review Board 1st Quarter 2021 Report. These reports are supposed to track the results of internal investigations into why people have died in SFPD custody and why officers have fired guns. As you might imagine, the reports actually reveal a sclerotic process that yields insufficient policy and practice change so that we might have fewer dead bodies and discharged guns. The Commissioners dug hard into these reports last night. It was yet one more broken beam to fix in the sagging fortress that is SFPD. 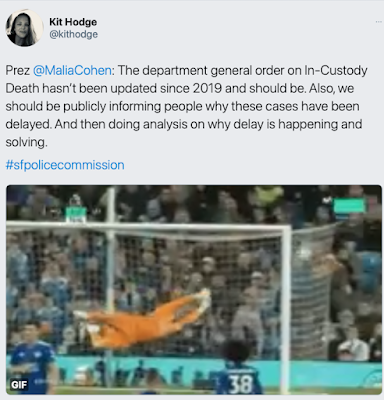 As I mentioned above, I did a double take when I saw this Awards Department General Order edit on the agenda last night. The timing is not exactly in tune with the moment. However, I understand the reasoning: if we begin to reward good actions in SFPD instead of toxic interpretations of "valor," it'll help change the culture for the better. The policy changes considered are actually part of the Department of Justice's 272 reform recommendations. Amazingly, it has taken two years to get to the place of presenting these edits for a vote, and there were still lingering loopholes, deftly pointed out by Commissioner Hamasaki. The Commission nonetheless voted to pass the new policy and send it to meet and confer with the Police Officers Association. But minus Commissioner Hamasaki, who rightly pointed out that officers can still be eligible to receive a valor award while being under active investigation for shooting someone, perhaps even for the same incident. This vote felt like another example of running into brick walls with SFPD; in any healthy organization with good actors, these revisions could have been accomplished in one two-hour internal HR meeting. Maybe over muffins.
Commissioners: what happens when you continue to hit brick walls? 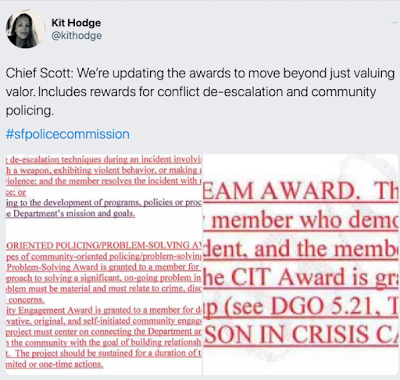 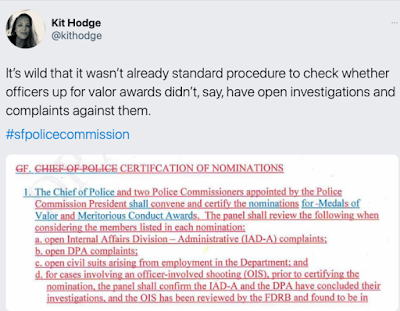 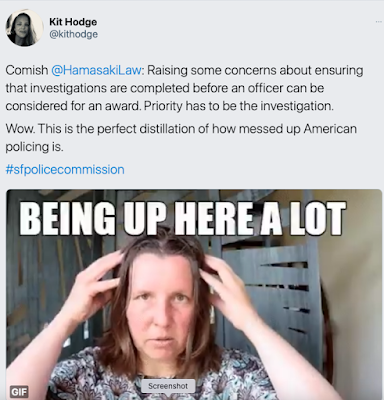