How I got involved in SF Parent Coalition 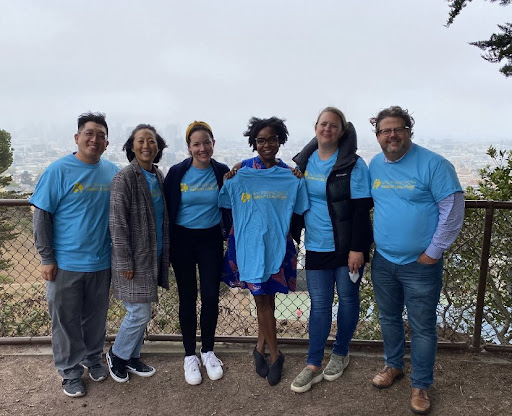 Me and the rest of the SF Parents Board.

Over the last half year or so, I've gotten more and more involved with a group that is now called San Francisco Parent Coalition. This was far from a given. If you read my quarantine journals (1, 2, 3, 4 and 5--and I warn you in advance that they are messy, raw and maybe a little too high in cat content 😻), you will see a progression from deep suspicion of this group to someone who works for it every day, including far too many weekends. Someone who wishes she didn't need to be involved but feels compelled nonetheless because, like most people, I want every kid in this city to thrive in our city's public school system--and that still isn't the norm.

Why was I suspicious? Let's speak frankly: like many, I thought it was a group of white parents rolling in the poisonous baggage of decades of white groups organized for ill (parents, educators, legislators, etc). Though it turned out not to be true, it does none of us any good not to acknowledge the overwhelming harm that organized white groups have had on public education and individual children over the course of history of the institution in this country. And that school closures have been a tool in that arsenal, wielded by white people. This level of racism continues today. There are white parents storming Board of Education meetings throughout the country, violently demanding the end to teaching basic history of our country. And yeah, a lot of it looks very well organized. White bias in our country's still overwhelmingly white and female teaching force continues to directly impact the quality of education and its dire implications for kids with black and brown skin. Including in major blue cities like San Francisco; I've been in SFUSD schools where the MO in the hallway was white adults screaming at Black kids.

So, I was suspicious. I committed myself a while back to centering my politics on undoing anti-Black racism, and that remains my commitment today. It's why I devote most of my Wednesday nights to watching the Police Commission meetings which, I'll be honest, is not exactly a good time; please tune in and ask why Black San Franciscans are still, almost six years into a major reform effort, 10x more likely to have SFPD use force on them than White people. It's why I voted for Commissioner Alison Collins--twice--and why I voted for most of the rest of the school board, including President Lopez. I hoped their campaign rhetoric would translate into real change in the deeply troubling racial disparities currently baked into SFUSD.

(Though I am also extremely cynical. This is not my first time around the political block in San Francisco, and I can't say that my earlier laps instilled a lot of confidence in this city's ability to get anything done. At least, not without a lot of really ugly BS. Case in point. But when it comes to your kids, you're willing to do anything, including choose to hope.)

Did our city's education leaders' rhetoric match up with their actions? When the answer to this question started to become yes sometimes but no more and more often, and when I saw my own kids and kids I had known since they were in diapers falling into very, very dark places, my trust in the people I voted for began to fray. At the same time, the rhetoric I was starting to see in certain Facebook groups devoted to maintaining the status quo was so bizarre, that I had to unfollow. I was also in the Decreasing the Distance Facebook group as a lurker as well, wary of engaging because of some of the things I was seeing from certain regular commenters (who have since moved on). Yet, despite this, Decreasing the Distance increasingly appeared to be the only place where constructive work was happening. It was around that time that a friend from my kids' school invited me to a Zoom meeting for what was then Decreasing the Distance. If you saw me that first meeting, I probably scowled and furrowed my brow the whole way through; it's hard to admit when you're wrong, even when people are incredibly nice.

Yet, as I slowly got to know more of the people involved in the day to day work of what is now SF Parents, it became very clear to me that this group was not the white parents of my worries. Quite the opposite. I am blessed to work with an amazing array of people, and it's painful to watch my BIPOC colleagues be attacked by people who are capable of better; this letter says it all.

Are white people involved in SF Parents? Clearly. Hi! Is the group centered in whiteness? No. Is the group a broad coalition welcoming people across the entirety of the San Francisco political spectrum? Yes. That means that there are people with whom I vehemently disagree on other issues, but with whom I share common ground when it comes to the importance of public school for San Francisco's children. Thank god we at least have that in common! Does SF Parents make mistakes? All the time, and we try to learn from them and become better. I am personally responsible for some of those mistakes. Mea culpa.

Am I getting paid by secret dark money billionaires determined to privatize SF public schools? Oh my. Please understanding that I am laughing hard enough to cry as I type that question. No. No, I am not, and no, I will never be part of an organization of that kind. The mental gymnastics it takes to get from "loose group of diverse parents who want their kids to be able to go to school again because they really value a public school education and their kids are hurting" to "wants to somehow use all these public school enthusiasts to turn the whole district into a private charter network" is ... creative. Still, like I said above, I get the suspicion; there but by the grace of god go I. So, if you're not sure what to make of bizarre spiderweb graphics being passed around on social media, just come meet with us and judge for yourself.

Come to one of our events, or give us a call or email. Maybe we'll find we have common ground, maybe we won't. Most likely we do, though, because if you're concerned enough to be reading this blog post, then you, like us, really want the best for kids and public education in San Francisco. We don't own that position. No one should. This is a group project, folks.

Hope to meet you soon :)