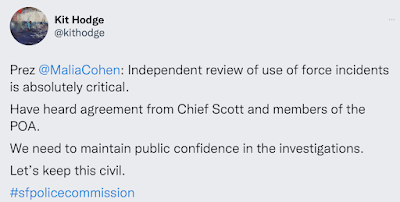 The San Francisco Police Commission oversees the policy, top leadership and aspects of budget decisions of the San Francisco Police Department. The Board of Supervisors, which appoints some of the commissioners, ultimately controls the budget of the department. I live tweet meetings at #sfpolicecommission most Wednesday nights beginning at 5:30 pm, along with a few other dedicated watchdogs. Any factual mistakes are my own.

Last fall, I pledged that I would only do summaries of Police Commission meetings if there were significant steps forward with reform efforts to report out and discuss. Thus far in 2022, there have not been any significant steps forward. I'll caveat this by noting that Commissioner Carter-Oberstone's extremely capable questioning of Chief Scott about calcified racial disparities in SFPD policing at the February 9th meeting felt like a very healthy dose of sunshine. He expertly drew out SFPD's tacit unwillingness to try anything to reduce these insidious disparities that ruin so many lives. 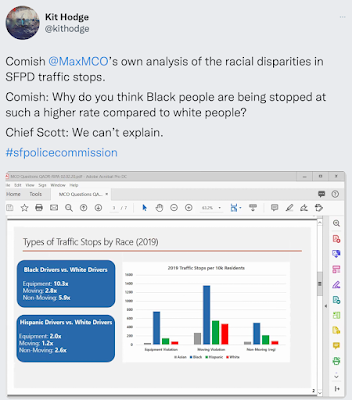 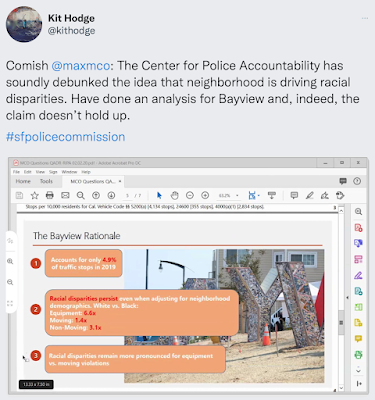 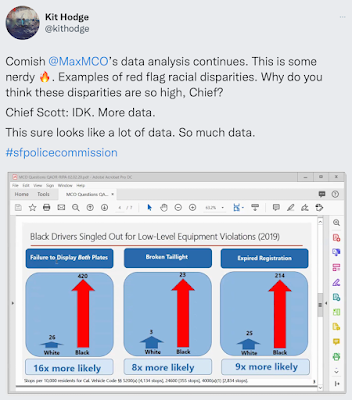 Instead, the January and February 2022 meetings have been dedicated to not losing the little power that the public has to hold violent police officers accountable. In other words, a lot of well-meaning people have been working hard just to hold the line on the most basic idea: that police should be held accountable by independent third parties who represent the public. To put in perspective the disparity between the de jure power and the de facto power, according to Mapping Police Violence, "98.3% of killings by police from 2013-2020 have not resulted in officers being charged with a crime."
Meanwhile, we've seen an uptick in reports of police officers refusing to do their jobs, even in the face of overt criminal activity; according to officers calling into meetings, this is because they feel demoralized by too much criticism. To put this phenomenon into context, see below on typical murder investigation stats by U.S. police. SFPD's numbers on crimes solved are not easily accessible, but I believe that they aren't tremendously different. I would happy to be wrong. If not, there's a lot more going on besides demoralization. 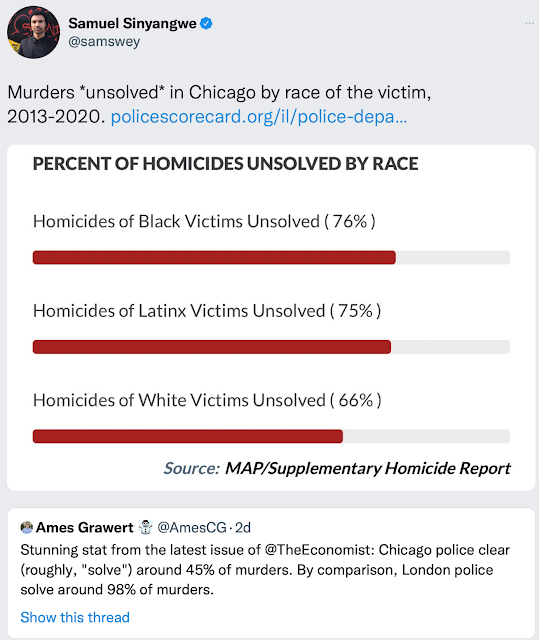 Similarly, according to analysis by Mapping Police Violence, there is no correlation between the rates of police killing people and violent crime. Police are not killing people more when there is violent crime, and violent crime is not going down due to these killings. This graph is from 2015, shortly before SFPD officers killed Mario Woods--a case yet to be prosecuted. There is something else going on inside SFPD. 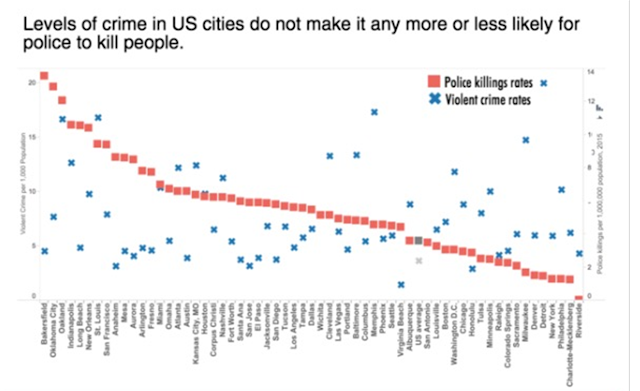 Does anyone control the police?

It's worth pausing to reflect on this moment, and ask a critical question. Do we think anyone controls the police but the police? Do you assume that the Mayor, or other elected officials, or judges truly have control over policing in our city?
I have been asking myself this explicit question since Nomber 2016. If the country fell to full-on right-wing extremism, would SFPD stand with the people of San Francisco or with command in DC or, yikes, Sacramento? I will be the first to admit that this felt like a very fringe thing to ask back in 2016. Maybe to many people it still sounds ludicrous, despite all the investigation reports from what went down on January 6th in Washington, DC (a mixed bag for policing, to put it mildly). All I can say is that it is a reasonable and necessary question to continue to ask, even if the answer is yes in that moment; we want it to be yes. Because as this latest test of boundaries from police union true believers demonstrates, a significant number of officers would rather that the answer was no.

I also want to pause and reflect on why we are collectively so scared of asking this question out loud. More specifically, who has a vested interest in not asking that question, beyond the police officers association? A recent tweet from Supervisor Mandelman, who also let it be known in summer 2020 that he was fine with an indefinitely extended citywide curfew in San Francisco during discussions of protests of police violence. This is not to pick on Sup Mandelman in particular. He's done some good things on other issues, and is hardly alone in the way he relates to policing in San Francisco. But this tweet does say a lot. After all, Supervisor Mandelman was one of two supervisors who voted against a settlement for Dacari Spiers, the man who SFPD Officer Stangel beat until Spiers' bones broke. Not coincidentally, the Stangel case is what prompted the SFPD to leave the MOU with the District Attorney, and this wave of being "for" or "against" Chief Scott on social media.
As I look around the city, what I see is wide agreement on the common problems. More or less no one is for crime. The debate has always been about how to address crime and other kinds of social ills, and what values should guide those responses. The officer families who have been calling into police commission meetings this Black History month believe that more policing is the only possible solution. In the last couple years, there's been more support in San Francisco for shifting money from the gargantuan SFPD budget to other solutions. We've dipped our toe in this other path with programs like the Compassionate Alternative Response Team. But we pulled back almost immediately on larger shifts. Not just the Mayor's office, but also the Board of Supervisors. Even the members who most vehemently spoke up for investing in other solutions.
Why?
It's complicated, of course, but the one thing that is often too taboo to say in San Francisco is that the Board of Supervisors spends its time debating the least consequential issues in our city (hello, Ferris Wheel) and year after year, fails to figure out how to find better ways to solve the larger problems, at any sort of scale. Instead, the Board throws money at a vast army of now essentially permanent nonprofits who do what they can to lessen the pain and impact of our city's most entrenched problems, but there is no plan or serious work on actually solving said problems to the point that the work of the nonprofits becomes unnecessary. So what does a supervisor do when constituents call in to complain about the impacts of these problems? They lean on the police for cosmetic solutions, to look like they're doing something. Sweeps, more foot patrols, hulking command vans, etc.
Solving the problems would involve a level of competency among our political class that we haven't yet seen; or at least, not put in this direction. It would also involve open discussion of the costs and tradeoffs of other ways of handling work currently by default put under SFPD. We have reams of reports on the true cost of homelessness in San Francisco, but have we ever done an accounting of the true costs of specific policing tactics? For example, resource-intensive Buy Busts.

Without these conversations and willingness of our political class to admit how much they lean on the police to make them look good--even the ones who rail against the police in theory--we're left, frankly, with religion. And a religious-like culture within SFPD: We are our own gods, we are above criticism, what we do is unquestionably honorable and good. It's a compelling myth to many, inside and outside the SFPD. Why? For SFPD officers, pride of work, a sense of unique mission, and generations of family legacies can quickly metastasize into a cult-like culture. For ordinary citizens, because we have yet to see other ways and/or--less generously--because we don't feel the brunt of anti-Black and anti-Latinx policing in our daily lives.

Dismantling racist officer behavior within SFPD policing is the lowest possible bar we're asking the police commission and department to clear. Those solutions are fully within the toolbox already; the department leadership simply doesn't want to because it's going to be the hardest thing they've ever done, and key leaders have tenous power compared to the aggressive police officers association. It will not be pretty.
Meanwhile, dismantling the systemic racism that creates the conditions for over-policing of Black San Franciscans as well as poverty, etc, is the bar we have yet to hold our full political class to clear. To do so, they'd have to do far more than fight over parking spaces and food trucks, and confront how much they've built their success narratives on the cosmetic work of the police--and the nonprofit complex that barely holds our city together.
Until we do so, we can't honestly answer the question "does anyone control the police but the police?" with anything but a no. And that should worry us, no matter how much policing we believe is necessary in San Francisco.
I hope more people are willing to ask this question out loud.
---
Before you go, take action! Volunteer for/donate to Wealth and Disparities In The Black Community, founded and led by Phelicia Jones. WDBC has been working on police reform and justice for victims of police violence since the SFPD murdered Mario Woods back in 2015.