Originally published on August 10, 2017 on the Vie Bikes blog. Bike content is always relevant, though :) 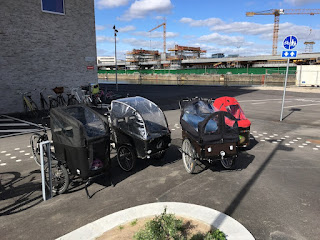 A tiny fraction of the bike parking at camp drop off in Copenhagen, Denmark.

Since starting Vie Bikes in early 2015, I’ve taken one week and a couple weekends totally off work. Otherwise I’m on call 24/7. So I’ve confined any traveling to places in the same timezone and a short trip back home. I’m not at all complaining. But you can perhaps then understand why I decided to spend a large portion of the summer working remotely in a very different time zone: Copenhagen, Denmark. Spiritual home of the cargo bike (and also two of our beloved suppliers). It was a chance for our whole family to visit relatives and immerse ourselves completely in a different culture. If you received any emails from me timestamped 3 am, now you know why. Mike, Elisabeth and Wesley did a great job of keeping things organized and moving forward in San Francisco.

I am not the first bike person to visit Copenhagen, so I will spare you the endless descriptions of the generally amazing bike infrastructure and culture. Yes, the city is indeed chock full of families and kids on bikes, including huge numbers of cargo bikes. It’s amazing and lovely and blissfully relaxing, though of course hardly perfect, and I speak from a place of privilege as a person who can physically pass as a white Dane. You can see photos from my visits to Butchers & Bicycles and Larry v Harry on Facebook. Here are a few other family biking observations, in no particular order:

The biggest take away from my biking time in Copenhagen is the very different gender dynamics at work. Unlike here in SF, at no point did I ever feel like I was in a man’s world. There were just as many, if not more, women using bikes as men. And that was also true for kids. There’s a decent, if far from perfect, culture of little boys being encouraged to ride and some choosing to ride for transportation as well as sport in the U.S. But it is far far more rare to see girls riding for transportation (or sport). I was so so happy to see little girls (and boys) of all backgrounds and dispositions commuting by bike. And I don’t just mean the sporty girls, or the rebel girls. It was perfectly normal to see the girls who dream in princess getting around by bike, too. Shiny shoes, poofy skirts, etc (though the princess culture isn’t quite as strong in Denmark in general).
The protected infrastructure and relatively car-free, calm side streets PLUS practical kid bikes made for commuting, with baskets, back racks, lights, fenders, etc. all make this perfectly enjoyable, imminently practical and just very pleasant. Girls were out in force, solo and in groups (and of course with parents) all over the city, both on bike and walking. It was inspiring to see young girls feel confident and safe enough to be out and physically independent. I just want to repeat: THIS IS HUGE. Many bike advocates inveigle their local government to plan biking infrastructure for people 8-to-80. After my time in Copenhagen, I would amend that to say SF should be planning for the most feminine kids of color to feel safe biking and walking around their city.

The Joy of the Rear Seat

This is deeply embarrassing to admit as someone who owns a cargo bike business, but I cannot for the life of me comfortably ride a Christiania trike. Any other cargo bike, no problem. But not that one, after many attempts. Our kids are now of the age where they’re getting around in a mixture of their own bikes and on a family bike. Since I couldn’t use the Christiania we had at our disposal, I ended up putting my tall five year old on a rear Yepp Maxi seat on a regular adult bike. It’s been a couple of years since I’ve ridden with her in a Yepp (she’s right at the weight limit), and that was definitely the last time it’ll be possible. But I’m glad we had this time again to be so physically close while riding. I had forgotten the pleasure of feeling her soft knees and hands on my back. If you’re still in this phase of family biking, enjoy it while you can!

It’s natural to assume that the motorists in Copenhagen must be cautious, saint-like people who drive super slowly to avoid upsetting the people on bikes at all costs. Dissuade yourselves of that notion! People drive fast and very aggressively, in some ways moreso than in SF. But the difference is that they always stop at intersections and patiently wait for people to bike or walk ahead. Always. (Reasons for that being both legal and cultural carrots and sticks.) Plus, since there’s generally less car traffic, they can zip to where they need to go without getting stuck in a jam, so there’s less aggravation and desire to act with anger. The confidence you can feel, and ample protection from cars, means that it’s easy and lovely to be able to bike at whatever speed you’d like. Sometimes that’s fast, and sometimes it’s super slow. When I was riding with one or both of my kids on their own bikes, it was really important to be able to go at their snail-like place and feel comfortable. Especially on the side streets because they weren’t necessarily ready for the bustle of the narrower protected bike lanes. And sometimes I just wanted to relax and slowly look around.
I’ve been trying to remind myself that it’s ok to go slow now that I’m back in SF. But the setup of our streets really prods people to ride much more quickly in order to feel comfortable with the pace of surrounding car traffic. I miss slow riding, and more broadly, the relative lack of anger and small violence on the streets. It’s disheartening to come back to a place where conflict, frustration, discrimination and violence are built into our public spaces. It really really doesn’t have to be that way. And I’m not just talking about transportation and bike lane policy.

Kids on Their Own Bikes

This was a big deal for our family this summer. We transitioned my seven year old to riding his own bike for most trips. He went kicking and screaming at first (who doesn’t prefer to read in the cargo bike instead?), but by the end of the summer he’d become a very confident commuter. Even my five year old began making shorter trips on her own (ridiculously heavy) bike. The transition wasn’t always pretty (my son got schooled a bunch of times for not staying far enough to the right in the bike lane so other people could pass him), but I loved how much confidence my kids gained from becoming regular commuters. My son was really proud to carry stuff on his back rack (“I think I’m ready to carry a baby now!”), and I appreciated how much it helped him manage his energy and emotional level throughout the day. He’s a very high energy kid and this is a big, big deal; there was a marked difference between the days that he biked and the days he didn’t.
For my daughter, this was a chance for her to feel like the big kid she so desperately wants to be seen as. The key for us was having the protected bike lanes and calm side streets. My son crashed his bike three times, once on the first day we were there when he was jetlagged and ran into a curb, once when he thought it would be cool to ride though a puddle that ended up being a big ditch and once when he spaced out on a greenway path and ran into the pole in the middle of the path. In all cases, he was totally fine … because these were all protected bike lanes and paths. Lesson being: kids (and humans in general) can and will make mistakes. We need to build forgiveness into our streets. In any event, I am super stoked about this transition and we’re doing our best to continue having them ride their own bikes at home.

There are bike shops everywhere in Copenhagen, and the suburbs. As in, nearly every commercial street. And they’re sort of like urban corner stores, with a few specialty shops sprinkled in. Not very different from the US, just way way more of them. And yes, the gender dynamics still stink. And no one is making much money running one.

All Protected Lanes are Not Made Equal

Though I think that SF advocates are beginning to understand this better, riding around a city chock full of protected bike lanes really reinforces the reality that they’re not all equal. We had to spend a lot of time looking for alternate routes to avoid the protected bike lanes that took us to our kids’ summer camp because those standard-but-too-narrow-for-this-situation lanes ran parallel to a windy, loud corridor filled with enormous trucks that were speeding by just inches away. My seven year old was sort of ok on that path, but one hard gust of that wind and my very light, small five year old would have gotten knocked into a truck’s path. And some of the right turns were really dicey, again, even with the protected path (which the trucks would mount while turning). So if any advocates or planners are reading this, please see item one again, and again, and again. 🙂 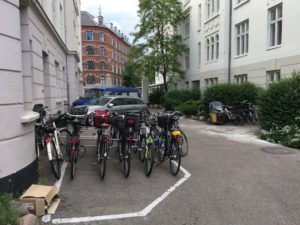 I was able to park my regular bike on racks in front of our apartment. The easiness was awesome! 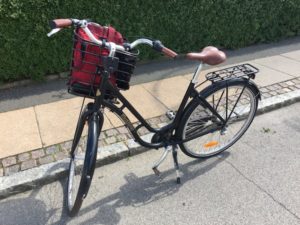 The bike I used, which was very typical. Denmark's is not a culture of fancy bike. The bikes are straight forward and often poorly maintained, but extremely functional and durable. 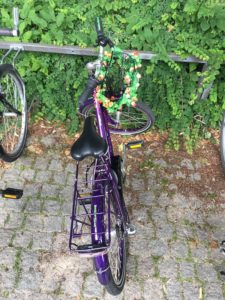 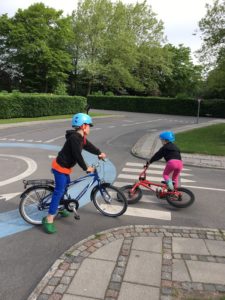 My kids tooling around at the Traffic Playground, which is a mini city designed for kids to practice riding on all kinds of bike infrastructure. There's also an adjacent toddler bike playground for the truly tiny kids. 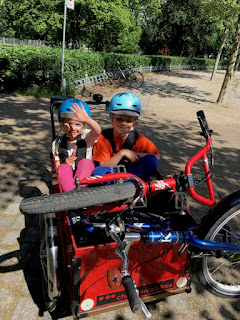 Fully loaded up in the Christiania. 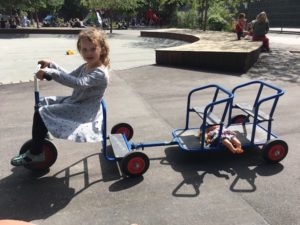 Many city playgrounds are actively managed by staff during daylight hours. Part of their job is putting out all manner of awesome kid-size cargo bikes and scooters for use on the playground. It's a great place to be a doll. 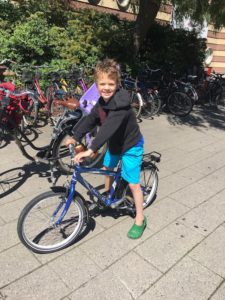 My son on his bike (minus his helmet, just for this shot). He ended up doing 20-30 bike commutes with moderate hills by the end of the summer. 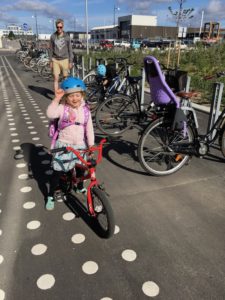 My daughter celebrating her first ever ride to camp/school on her own bike. 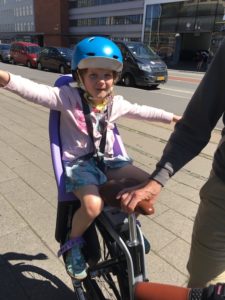 The joy of the rear seat. She liked the purple, I liked the coziness. We'll really never be able to do this again?!!

All in all, it was a WONDERFUL experience that I wish for everyone reading this post. I’m also happy to be back home in San Francisco, and have been very much enjoying being back in the bike lanes here, and most importantly, reconnecting in person with all of you. A life spent getting around by bike with your family is endlessly awesome.