Recent Books+ I’ve Clutched In My Hands With Joy: January 2021

I've been on a small Octavia E. Butler binge this month. Well, truthfully, I found it impossible to read anything that I'd be willing to put on a list until we got through January 20th intact. Since then, though, I've been enjoying the incredible feeling of physical and emotional lightness of being free from our previous federal administration, but also wondering whether our country can make big enough changes fast enough to avoid these years becoming simply the eye of a cataclysmic storm. We have two, maybe four, years to dissipate the storm, and those years are going to be extremely turbulent at the state level as well as the federal.

Which brings me to these books. Butler is a master at a master at tracing the through lines in our histories and imagined futures to unpack the consequences of failing to destroy and heal the toxic choices we take as a necessary evil of daily life. So, yeah, timely. These aren't hopeful books, but they're the honest and enjoyable words we need right now. 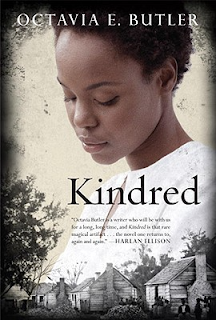 We usually assume that people want to time travel in stories, and I love that Butler flips the script on this basic pillar of sci-fi/fantasy. Dana is a Black woman just finding some measure of comfort and happiness in her life in 1970s California, when she's forced back in time to the antebellum south to save the life of her white ancestor. Dana quickly realizes both that she has to keep her ancestors alive if she wants to continue to live, no matter how much it costs her (a lot), and that the only way home is being subjected to the threat of death. There is so much to unpack in this beautifully woven, complex story, particularly with what time and home come to mean for Dana. Can we progress without healing the wounds of the past? Kindred is one of the most timeless looks at the personal costs of slavery in this country, but also just great storytelling you won't be able to put down. 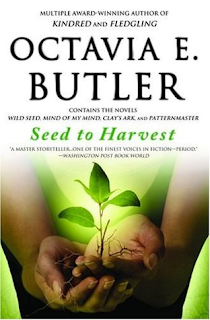 Seed to Harvest is a four book series that Butler wrote out of chronological sequence. I've actually only read the first two books in the series to date, Wild Seed and Mind of My Mind, and thus far it reminds me a lot of the Xenogenesis series in the way Butler probes our definitions of humanity, gender and race. The basic premise of the first two Patternmaster books is that there is a human-clothed entity, Doro, who has been breeding psychic humans to create a special race for himself. Doro is counter-acted by two different, equally extraordinary women, Anyanwu and then Mary, with competing visions for humanity. The premise would be interesting in any time setting, but it is the way that it interacts with American history, from the beginning of trans-Atlantic slavery to modern day-ish California, that makes them especially fascinating. I would not say these books are the most readable or well-told of Butler's work, but they're thought provoking examinations of how dangerous seeds bloom over time thanks in no small part to inertia and the human instinct to seek compromise with bad actors and institutions. Have you built something worth having if you build it in reaction to or within the context of a toxic system? A timely question, to say the least. I'm looking to reading the final two books.

Update: I went out for a run the day after I published this post, and hit play on the next podcast queued up on my phone. Because the world is wonderful, it happened to be this excellent discussion of the Patternmaster series on How to Survive The Apocalypse. I highly recommend listening after you read (some of) the books; the Brown sisters know how to take a story's themes and make them deeply personal. I'm so glad I went for that run.

Recent Books+ I've Clutched In My Hands With Joy: December 2020