Thank you once again to @jwaggo for allowing me to quote her tweets here.

I appreciate that I no longer have to start these summaries by noting whether the Police Commission did any real work the night before. The standard of analysis and questions has become so much higher than 2020, and it's a given that three out of the five Commissioners will come ready to work, documents read, questions prepared. So, last night we continued to hear back and forth between the Commission and Chief Scott about core strategy questions. Shootings in February were down in the Bayview, but still much higher than last year, and there was a conversation about both short- and long-term solutions to the violence in that neighborhood. The SFPD moved a Mobile Command Unit onto 3rd Street a while back, which is essentially a giant RV, but military style. Wealth & Disparities in the Black Community's founder, Phelicia Jones, has expressed frustration that the trailer truck was the SFPD's solution instead of more community policing. These sorts of questions will be up for even more discussion next week when Chief Scott presents SFPD's strategy to reduce gun violence in the Bayview. The work on this very serious issue is, in many ways, a microcosm of the larger issues around the direction and scope of policing in San Francisco going forward. You'll want to tune in. You'll want to give public comment. 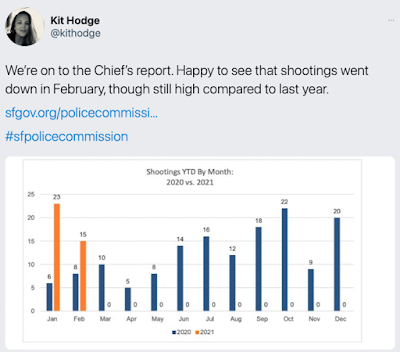 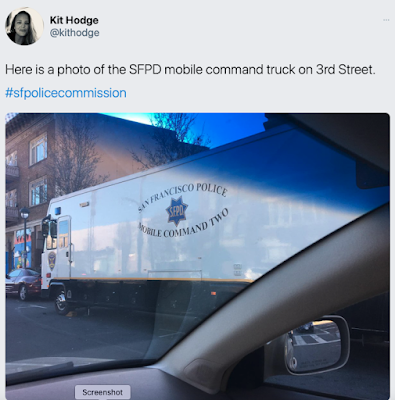 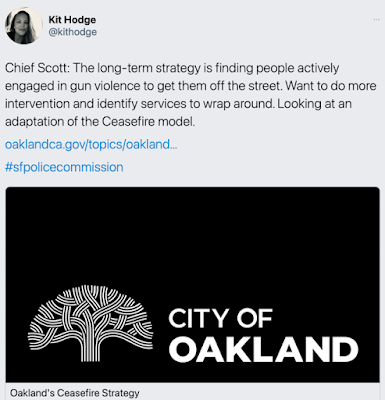 Making More of the Department of Police Accountability & Community Expertise

It's become clear over the last few meetings that the Commission is eager to see the Department of Police Accountability's voice integrated into the daily policy and operational work of the SFPD, which makes sense. The quarterly SPARKS reports by the SFPD and DPA are tedious but currently necessary presentations to hammer out all the policy work in progress across both agencies, including how they're collaborating (or not) with each other and community members (or not). The higher level take on these presentations is that policing is almost exclusively controlled by policies that outline what is and is not permissible, in minute detail, because Qualified Immunity for police officers makes it absolutely impossible to prosecute police officers for wrong doing otherwise. Actually, it just makes it impossible, period. So the solution for reform-minded Commissions is to micromanage all aspects of policing. I'm not saying that that's the wrong move given the current legal framework, but it is sad and tedious and requires Herculean levels of attention to detail if you want to make any reforms--not always a guarantee, depending on who sits on your Commission. Case in point, the SF Police Commission approved the secondary firearms policy last night and it will go to meet and confer. 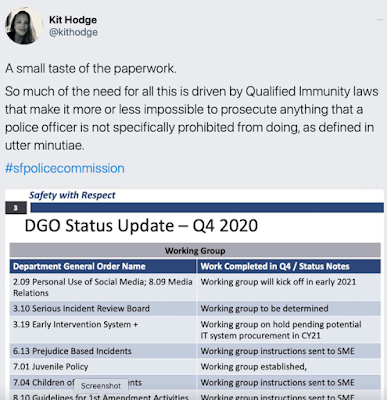 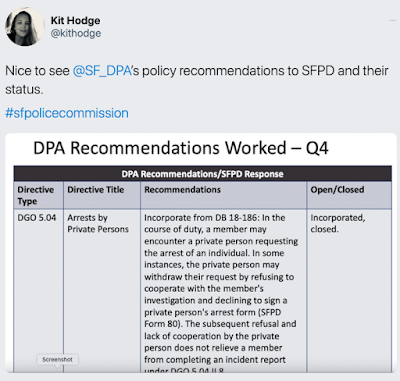 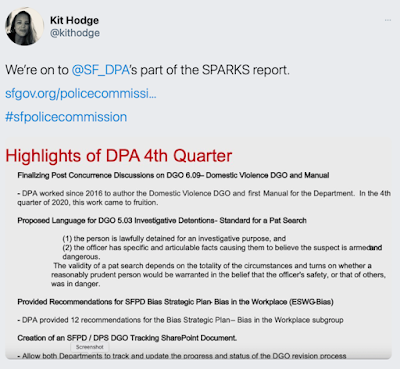 We heard a presentation last night from the SFPD on its 2020 Early Intervention Systems work. The EIS system is supposed to raise an internal flag if an SFPD officer is at risk of breaking department policy, and then offer appropriate levels of support to that officer so that they can turn things around and do the job right. In theory, it's a nice idea; you want to catch people before they're really messing up. However, in the absence of the SFPD, Police Commission and past District Attorneys meting out real consequences for violent and/or biased officers AND given the alarmingly generous thresholds and number of flagged officers in this system AND the persistent levels of racial disparity in policing, it's hard to say that it's working. The Commission is clearly trying to make this system more effective through technological and content reforms, which ... good. However, Commissioner Hamasaki's question last night to the SFPD presenter that, "if these aren't policy violations, what are they?" is one that needs to continue to be asked. (In case you're wondering, the Jonas Brother gif that got cut off originally said, "That's Deep." I'm pretty sure the Commissioner isn't a Jonas Brothers fan.) In the absence of serious consequences for offending officers, what is this system? 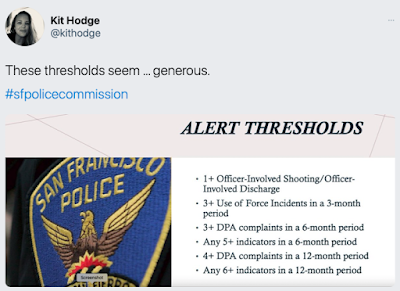 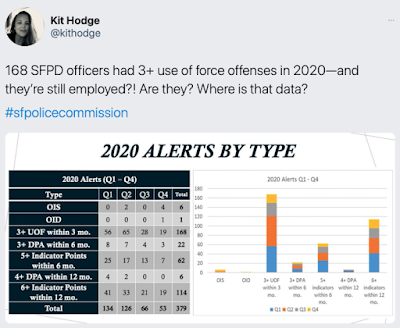 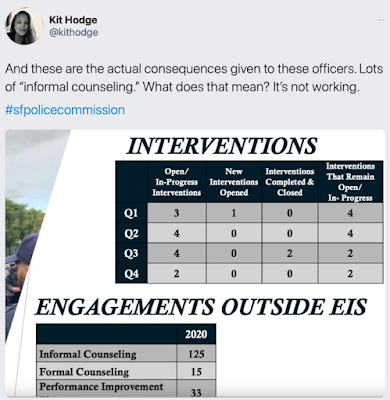 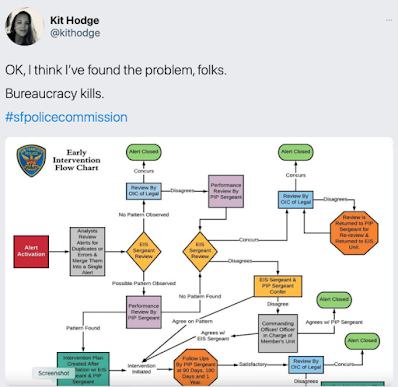 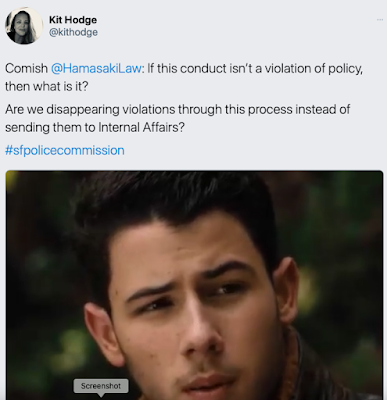