Special thanks to @jwaggo for staying up late enough to watch the bitter end of the meeting, and letting me use screen shots of her live tweets below.

Gun Violence in the Bayview (and Tenderloin) in Focus

Last night's agenda featured multiple presentations about strategies for reducing gun violence in the Bayview and, to a lesser extent, the Tenderloin. Board of Supervisors President Shamann Walton presented on the new D10 Public Safety Plan and then California Partnerships for Safe Communities gave a much-anticipated presentation on a data-driven analysis of gun violence over time (the funding for this work was arranged by President Walton). There is a great deal to unpack in the latter presentation, and I'm going to defer to Wealth & Disparities in the Black Community's official leadership's take, particularly when it comes to the fine balance between pinning responsibility on individuals versus structural stressors. More on that next time. What I can say now is that the California Partnerships presentation included a slide that reveals just how broken the criminal justice system is right now. We all know this, yes. We all think we know this, but sometimes maybe we don't feel it deep enough to make the changes necessary to turn it around. Aka, violence is a policy/budget choice, not a moral failing.
Last night was the first meeting for Commission Larry Yee. He was largely silent, but there is, yes, a lot to take absorb in this work. I hope we hear more from him at future meetings. Commissioner DeJesus remained erratic. 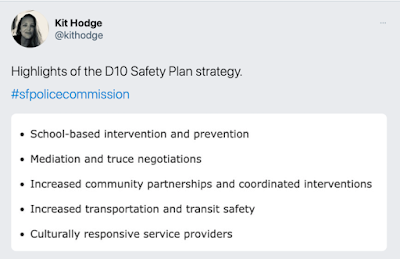 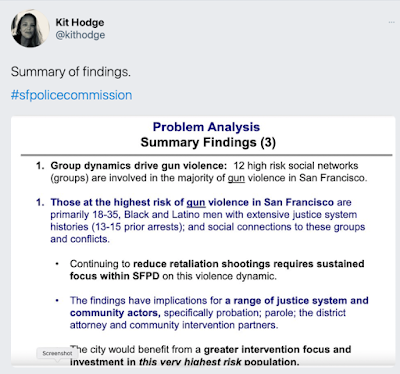 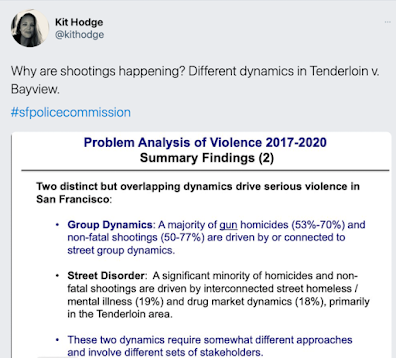 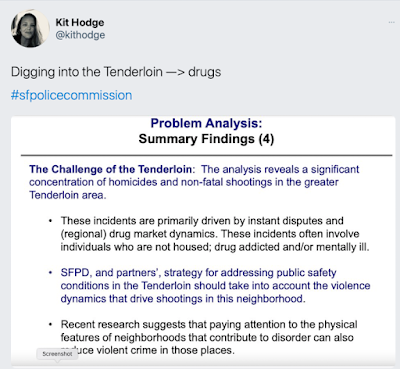 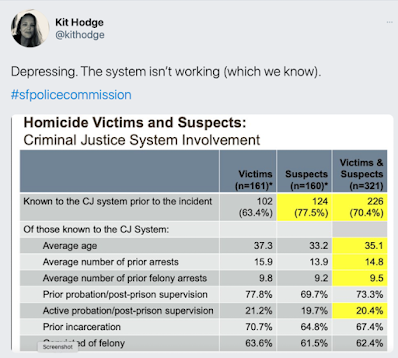 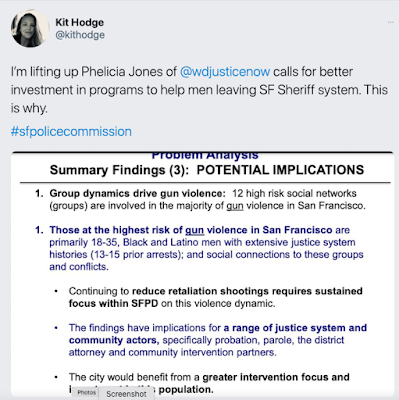 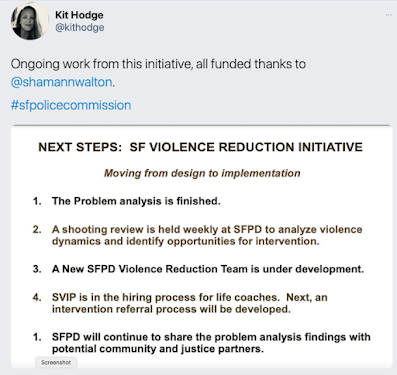 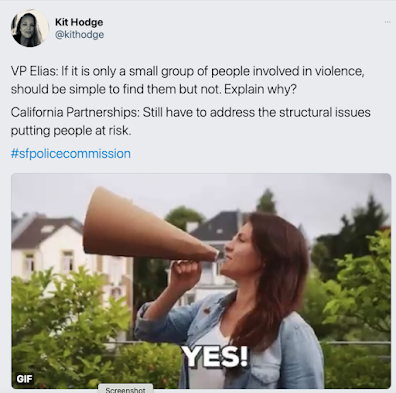 But What Is Strategy?

Back in February, President Cohen made it clear that she expected Chief Scott and the rest of the SFPD to begin talking more explicitly about strategy during every update. Before that, the Scott's reports were essentially story time around the bonfire. Chief Scott has clearly taken pains to move in the right direction since then, but the Commission still has some work to do to get SFPD staff to understand that strategy is not simply a list of programs and anecdotes. Conversations about strategy should include analysis: Did it work? Were there negative secondary impacts? What was the cost v. benefit to the department and to the community? Etc. The department's basic lack of understanding of what it means to talk about strategy was on glaring display during SFPD's sorry presentation on their Bayview strategy. Sorry, folks, just saying the word "Community Policing" over and over doesn't mean anything unless you're a witch. 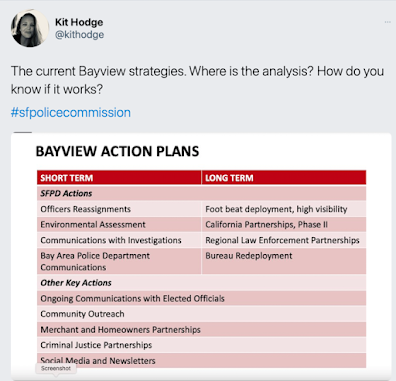 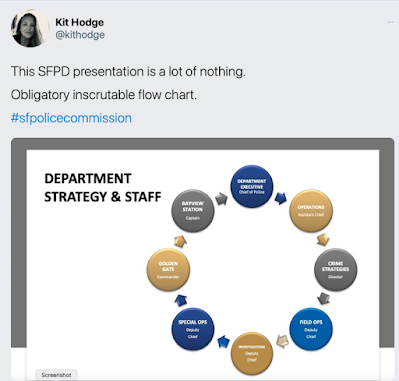 Meanwhile, the good men over at SVIP are clearly under the gun to show metrics that justify their continued funding; ironically, their work is to essentially undo the harm that SFPD (and many others) have inflicted. Whether you think SVIP is doing a good enough job or not, the difference between the burden of proof placed on them and other nonprofits scrambling for funding compared to SFPD is really something. This is SVIP's presentation from last night. On a related note, it was also upsetting to see how much pressure SVIP is under to provide individual solutions to problems that are so much larger than any one person. Yes, SVIP can try to install a growth mindset in someone (a repeated mantra of the staff of the program last night). SVIP can throw the person their trying to help a tiny buoy and then convince them they can swim and stop drowning, but if the ocean the person is trying to swim in is violently turbulent, how's that going to work out? In other words, the city has to be willing to solve the structural as well as the immediate high risk individual needs. As one commentator from the public health world pointed out, Black people in San Francisco die much younger than anyone else here. My main takeaway from last night, then, is that the discussion should be considered the first of a number of deeper analysis meetings--that culminate in a lot of red ink on the city budget.

The SF Youth Commission's presentations on their city budget recommendations and a resolution on stopping anti-Asian Hate Crime came on after 9 pm last night, and I had kids to tuck in (there is some irony here), so I don't have much information about what happened at the meeting. But from the presentations, it appears that the Youth Commission continues to come out strong with concrete ideas for realigning San Francisco's budget to reflect the values we claim to have as a city. So I'll just say this: more than ever, we need to listen to our youth. 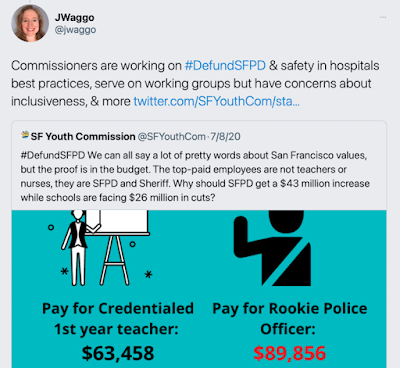 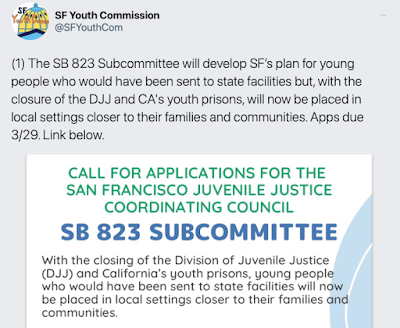 Tomorrow! Be Part of the Solution 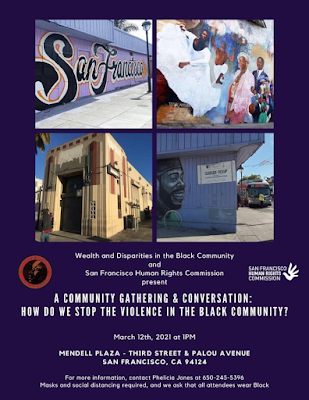