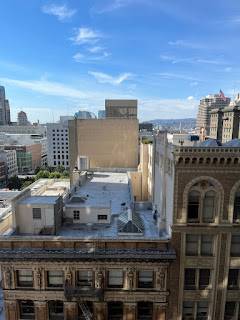 A beautiful city, stuck in a vicious cycle.

Last year, I decided that I would only write summaries of San Francisco Police Commission meetings if that body made any substantial progress on reducing the persistent racial disparities in SFPD's policing practices, which are some of the worst in the country. I have not written a summary since February, and by and large, that write-up still rings true. The police commission has not been able to move the needle on troubling racial disparities for Black San Franciscans. Instead, the city has given SFPD more power. Officers can now do more surveillance of people, use killer robots and film a reality TV show about their work. If you like trashy dystopian sci-fi, you'll enjoy San Francisco.

Why is this happening?

Much of the efforts to give SFPD more power are happening at the Board of Supervisors, which continues to depend on policing to reduce the cosmetic impact of chronic problems like homelessness and poverty, particularly in the neighborhoods that are seeing a surge in crime. This is nothing new, and voters have expressed increasing anger over our Board of Supervisors' general inability to do meaningful work.

This shouldn't surprise anyone. Any experience with crime over the last few years has felt especially threatening to a population that now lives with some of the highest levels of anxiety about covid and the impact of covid restrictions. The world has been unraveling all around us and people have not been in the mood for tolerance or optimistic takes when basic life doesn't function. Hence, we recalled our previous District Attorney and voted for a new DA with a clearer commitment to penalties for crimes. Whether or not this will have a sustained impact on reducing crime and improving people's lives remains to be seen.

Going forward, I remain skeptical that any Board of Supervisors efforts to respond to the public mood will do anything but hand SFPD even more power. The public discussion of how to use police in San Francisco, and most places in the country, remains an exchange of slogans. Which is understandable. Who has the time or interest to learn about the nuances of policing when you're trying to live your life?

But I do hope that more people think through the logical ends of the slogans because they do and will have direct impacts on our lives, some far more than others. If you're a centrist on the national political spectrum, you'll appreciate the way this podcast conversation teases out the logical ends of the two dominant slogans--wait until the very end for a specific take on SFPD. If you're left of the center and already on board with police reform, you won't appreciate the source.

Instead, the left of center is where the conversation needs to get more real about basic competence within SFPD and San Francisco government structures. Incompetent leadership and programs are not progressive; they harm the progressive cause, however well-spoken or intentioned. We're allowed to ask for both vision and execution. That is my hill.

Meanwhile, over at the police commission, we have a number of new, well-intentioned members trying to make sense of all this political posturing. The commission volunteers have occupied themselves with managing the on-the-ground impact of City Hall's wild swing toward more policing and more police powers, while also working on a new policy that would place limits on SFPD's habit of targeting Black drivers during traffic enforcement.

The latter is a good thing, even if you don't care about the dangerous over-policing of Black San Franciscans (sadly, the view of some residents). If done well, muting SFPD's impulse would free up those officers to focus on policing that actually results in less crime. The proposal is an anti-racist policy move already in place in multiple cities as well as plain good government. If something isn't working and has a negative impact on the people you're supposed to serve--a very negative impact--you pause, reassess, and change your practices. This should be common sense.

We'll see if the police commission is able to pass a meaningful policy and then oversee its successful implementation. The community input process to date has been more focused on making SFPD officers feel seen and heard than on seeking out unfiltered community voices; Wealth & Disparities in the Black Community has raised this concern repeatedly. So, we'll see.

I have to have hope because it's unconscionable not to want to change things for the better when people continue to suffer from SFPD's status quo. But I'm also allowed to have my cynicism. The bar has been so low for SFPD and the Board of Supervisors for so long. It may be rusted to the ground.